China Mieville is a virtuoso with words, and an imagineer of worlds. Some of his novels are not just mindbogglingly imaginative, but vivid and unforgettable, imprinting some of themselves on the reader forever.

Some of his novels, on the other hand, don't. 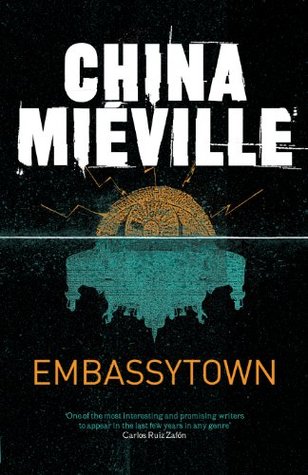 Unfortunately, Embassytown falls into the latter category. Set in a universe many centuries after mankind had left Earth behind and become an interstellar species, the novel is narrated by a woman who grew up in Embassytown, an outpost on an alien planet, and who has spent her early adulthood as crew on interstellar spaceships. The main plot starts with her return, married to a linguist, to Embassytown, the backwater she had never meant to return to, for a few months.

There are many ideas - space travel is undertaken through the immerspace (always space), while life happens in the manchmal (sometimes) dimensions. So faster-than-light travel occurs because ships and travellers change their own dimensionality during transit, travelling not through threedimensional space at all, but through dimensions and universe in a completely different way. This allows Mieville to fachsimpel phrases in his very own German-inspired lingo for a good while, but it turns out all of that is really just a sideshow. Really, this is a story about an enclave of humans in an alien world, interacting with aliens, and changing the very foundations of alien being.

The aliens, insectile creatures that can organically bioengineer things that human technology is incapable of, have two mouths, speaking a language that is not capable of lies. The humans can only interact with aliens through Ambassadors - specially bred identical twins who synchronise their experiences and speak simultaneously, just as the aliens do.

In that setting, the novel pursues two main plotlines: what if aliens tried to learn to lie? And: what if humans inadvertently and disastrously affected the aliens?

Of Mieville's previous novels, Embassytown reminds me most strongly of Iron Council. Just like Iron Council, this is a novel of ideas and philosophy, of thought experiments and politics. I found myself able to imagine and believe the world, but struggling badly with the characters.

There are many characters, but none that the reader gets particularly attached to. Our narrator is quite distant, married but not really seeming to love or care about her husband very much (and physically unfulfilled by their unsuccessful sex). She has affairs, casually, openly, as does her husband - this is not a world of monogamy at all, but a universe where people seem not to form (m)any attachments to others. The people in the story are inscrutable and incomprehensible, their actions hard to understand. Our narrator is somewhat alienated from everyone, and so, as a reader, I am, too. But I'm also alienated from our narrator, so basically there is not a single character, human, robot or alien, in this book, which I can relate to, understand, empathise with.

The internal politics and power shuffles are varying, and many of the characters seem entirely replaceable. When our narrator interacts more with one doublet Ambassador, it seems that they are important, but then focus shifts, and our narrator spends more time with another Ambassador, and honestly, there never seems all that much difference in terms of character traits between any of them. If they happen to have different angles, different agendas, then these differences are mostly unpredictable and not a product of any coherent belief system, but almost an inevitability of politicking. The characters don't really seem to have views and philosophies, they have social pecking orders and cliques.

Bereft of any character anchor, the story still has some rewarding aspects - the imagination of the aliens is superb - but is sadly not a very fulfilling novel. Just like Iron Council, it is a faintly bitter, not entirely pleasant read, lacking the spirit of his greater works (Perdido Street Station, The Scar, The City & The City), and replacing it with less fulfilling thought experimentation, philosophising, politics. One for Mieville completists and fans, I guess - I would not recommend this novel to people who haven't read any of his other works. 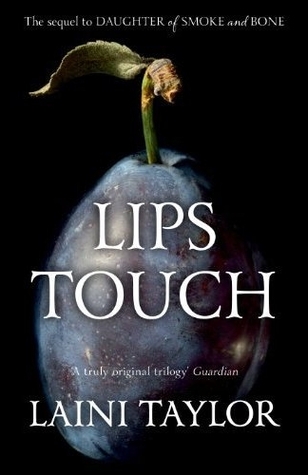 Lips Touch: Three Time is a collection of beautifully written novellas / romantic fairy tales for (young) adults. Exquisite prose, archetypal characters, only slightly marred by the fact that everything is over-prettified to the point of near-Disneyfication: love, in these tales, is a blush-inducing magical thing between Adonises and Goddess-like maidens, with just the right shot of lust to be sensual, yet safely pre-watershed literary programming.

Love in this book is an expression of aesthetic beauty, rather than anything even remotely connected to affection and real emotions. This fits with the beauty of the prose and the general worship of all things beautiful, but it also means, as well-written as the tales are, they are ultimately incredibly shallow and quite hollow, as if one were reading a story set inside a universe created for advertising Coca Cola or fashionable clothing or perfumes or acne cream. But then, these are tales about beautiful youngsters, for beautiful youngsters (and those who wish they were).

Nothing is more important or valuable than beauty, in these tales.

Still, enjoyable to read & the writing voice is beautiful.