The Tiger and the Wolf by Adrian Tchaikovsky 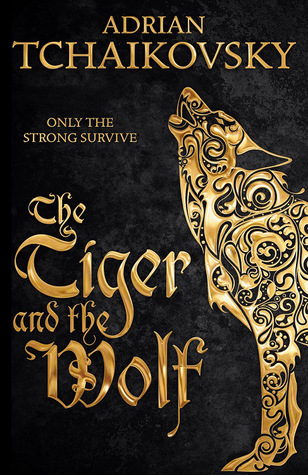 The Tiger and the Wolf is one of those books that's hard to miss in book shops, with its gorgeous, striking cover and metallic glinting patterns. Even so, the back cover text never appealed to me, so I only picked up the book after reading something else by Adrian Tchaikovsky which convinced me that he is a good writer.

Maniye, daughter of a clan chieftain of the wolf tribe, is on the cusp of passing into adulthood. But passing the rite might not go well: the tribe's shaman has a special, hostile interest in her, and she has a secret that none of her peers must find out. In her live two souls, for she is not just of the Wolf, but also of the Tiger, whose tribe has been at war with the wolf tribe since before she was born. If her other soul is revealed, her life will be forfeit.

To make things worse, she is a bit of a runt of the pack - small, without friends, and utterly alone. When her father returns from an annual rite having taken prisoner a stranger, a priest from the snake tribe, foreign to these lands, Maniye finds a mind she cannot help but be intrigued by - even though her father intends to sacrifice the Snake to his god...

The Tiger and the Wolf is set in The Crown (far North) of a world where all humans have totem animals, whose souls they share, and whose shapes they can "Step" into, which comes in  handy in combat. It's a striking setting, and one which is likely to make for a very visually satisfying TV show one day. The plot lives up to the setting: Maniye's adventures never get boring. Relentless pursuits, a merciless winter, friends and foes - the book is richly seeded with chances for Maniye to prove her worth, run away with her tail between her legs, or suffer a grim fate.

It's not just Maniye's story, however. We do get other viewpoint characters, and other plot lines which intersect with hers. It took me a while to realise that The Tiger and the Wolf was building up, in its own way, a panorama of a world which is no less detailed, nor less epic, than the Song of Ice and Fire series. Similarly, there is a ruthlessness infused in the tale - characters have motivations and limitations and survival is never a given. There is also great cruelty - albeit fortunately the book never becomes as seedy and filled with sexual violence as GRRM's magnum opus. Still, if you are squeamish about brutality, Tiger and the Wolf is likely to make you very uncomfortable indeed.

Aside from being less seedy, Tiger and the Wolf also sets itself apart from Song of Ice and Fire (and the many books that try to emulate its style) by having fewer villains and more characters who try to be decent human beings, even if their world is a harsh and unforgiving one. No, it's not a kindness-fest of people being nice at each other. Instead, it's a novel where ruthlessness is balanced by a degree of human decency, and where evil is more often the result of necessity or tradition than a choice actively sought out. This makes the book much less unpleasant than Song of Ice and Fire - you don't feel as if you've just soiled your brain in grimy muck when you finish reading.

There are some relatively superficial flaws. Maniye spends a lot of the book being chased, but as a runt, I often struggled to see how she escaped from the jaws of her pursuers. Furthermore, there are some stylistic devices which are a little overused. Perhaps the latter is unavoidable in a 600-page epic.

On the whole, anyone who enjoys their fantasy novels big, epic, harsh and tense will appreciate The Tiger and the Wolf. It's not just a case of Song of Ice and Fire mimicry, but a book which is truly a peer of that other epic, matching its grandeur and, for my taste, frequently exceeding SoIaF's quality. It's a cracking read.

So, these are the Hugo nominations I have just submitted, with bold on the ones I want to win the Hugo:

Your nominations for Best Novel:


Your nominations for Best Series:

Your nominations for Award for Best Young Adult Book (not a Hugo):

Your nominations for Award for Best Related Work

Your nominations for The John W. Campbell Award (not a Hugo):

Email ThisBlogThis!Share to TwitterShare to FacebookShare to Pinterest
Labels: hugos

Review: The Komarovs by Chico Kidd 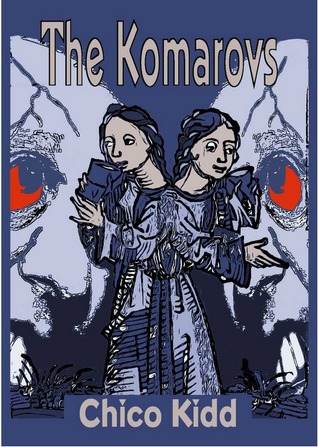 The Komarovs is a short novel in the style of mid-twentieth-century pulp fiction. The story takes place in a travelling circus / fairground in Lisbon, where a ship's crew and a bunch of carnies are about to find themselves embroiled in an adventure with zombies, murderers, ghosts and villains...

There's a lot to enjoy about The Komarovs. A fast pace, a larger-than-life plot, and a strong affection for pulp fiction style and substance all make this a fun, quick read. I was never quite sure when the story is set - it could be any time from 1850 to 1990 as far as I can tell - before mobile phones, but after the rise of freak shows and such entertainments.

While it's fun, the story does run into the limits of its medium and length: as a short ensemble piece, we never spend enough time with any of the characters to really get to know them. The most central character is Captain da Silva, who can see ghosts and perform necromancy, but even he barely gets enough time to grumble "I'm getting too old for this shit" (with a few Portuguese expressions thrown in for flavour) before he is embroiled in one action scene after another. It's obvious that there is more back story - this is not the first story about da Silva and his crew - but as a standalone story, the characters are not quite as fleshed out as one would like.

Aside from da Silva, each of the other viewpoint characters is a bit one dimensional. So we have Harris; the werewolf; Sabrina, the he-she (androgynous person); the Komarovs, the evil Siamese twins; Benjamin, the Negro; Zriny, the metre man and circus director, etc.

So, you may have noticed words like "he-she" and "Negro" in the previous paragraph...

I must admit, it's been a while since I read a book which used the word "Negro". I'm guessing this means the story is set a bit further in the past (early 20th century rather than late), and it almost certainly is meant to place the writerly voice in that time, too, adding to the flavour of the text. It does, however, grate a little bit when about 80% of the references to a character aren't by his name, but simple "the Negro". This sort of referencing is not purely limited to Benjamin - the dwarf circus director is largely referred to as "the metre man", but poor Benjamin certainly gets the brunt of it. I ended up imagining Benjamin as Duplicatha / Flaturtha from the Asterix comics, and it felt like a clumsy writerly choice to me, because it was uncomfortable to read.

So, as long as you can ignore a somewhat un-PC narrative voice, and if you like 1940s style pulp fiction, The Komarovs is a pleasant enough diversion. I would, however, recommend finding the first of the da Silva stories and starting there, rather than starting with the Komarovs, which is apparently a sequel...