The Volunteers by Raymond Williams 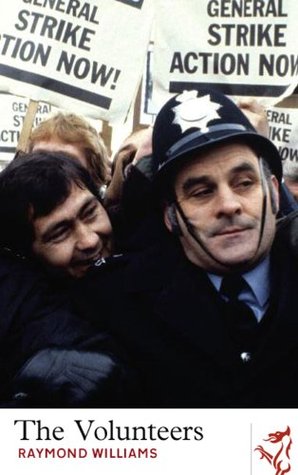 The Volunteers starts with a bit of a bang - the shooting of a politician in St Fagans National History Museum near Cardiff. Our narrator, a journalist working for a fictional equivalent of Newscorp / BSkyB, is sent out to follow the story. He's chosen because he has a past as left wing agitator / protestor, and because, as an ex-insider with some street cred, he might be able to connect with violent left-wingers.

The rest of the novel follows him as he comes up with theories about the events, and stumbles into something which may be a larger conspiracy.

It sounds like a political thriller, and it really very much wants to be. But, with a ruminating writing voice, a tendency to meander, and long descriptions, the story does not read like a thriller.

As things develop, you get a sense of the weaknesses of the book. The author has no good ear for dialogue. Most interactions our reporter has with people are described in some detail - we get descriptions and analysis of verbal manoeuvrings that read a little bit like a sporting commentary, a sort of tactical analysis, each dialogue a little skirmish, but at the same time, a lot of the dialogue is opaque and about not speaking plainly. Often, as a reader, I think I know what people are being circumspect about, but sometimes, I don't. It makes for an odd experience - getting a blow-by-blow tactical analysis without always being sure what was actually being talked about or implied.

The central premise, meanwhile, is just too laden with wishful thinking. It's a novel that is painfully aware of the ineffectiveness of the fringes of political classes at effecting change, so it dreams of mastermind tacticians and grand plans.

The book kept me engaged and interested all the way through, but by the end, it was hard to feel invested in any characters. Everyone was so clearly an idea, a concept, a theory, rather than a human being, that I did not really believe in any of them, and did not much care about any outcomes.

It is not surprising the book was written by an academic - it does have a very aloof feel to it, when it does not go into a journalistic, blow-by-blow account of a serious event. Those bits are quite well-done, but the meat and bones of the novel are rather less well-cooked than the set-piece scenes.

That said, I loved reading a book set in places I recognised (St Fagans! Cardiff! London! Finsbury Park!) and infused with political people and a political Welsh identity that is not just about being Welsh for the sake of being Welsh, but about class war, Unions, communities and industrial conflict (interestingly, without a persecution complex, unlike the grand lament of victimhood that is Cwmardy) - a national identity that seemingly perished a generation ago, by now replaced by a fairly shallow, red-rugby-shirt-wearing hangup about "not being English", with no other distinctions, a sort of boil-in-the-bag cultural identity... as someone who wasn't around in the 80s and who lives in Wales now, reading about a very different Wales was quite interesting.

As a novel, it's certainly a lot more fun to read than Cwmardy.

(I say Gandalf. I should say Gutenberg).

The writing is decent, the pacing solid, but somehow the story never really bewitched me, it never lulled me into that magical sense of being totally engrossed. It never absorbed me in the way that great fiction does. It's not The Neverending Story, it's not Inkheart, and it took the book about 150 pages before I actually started to like our hero. It's not that he is anything less than a decent guy, it's just that he isn't anything more interesting than your average guy either (until he finally unleashes some librarian-powers and starts doing detective work through means of research). Basically, everything is done well enough to be solid B-rate fantasy.

I suppose one of the big factors in not quite making me happy is the central conceit: that books are magical and magicians can pull things out of books, but the things have to fit through the space of the book's pages, and not be living intelligent beings. Which sounds interesting enough, except mostly, our hero pulls out guns or swords or, at a stretch, healing potions. It reads like books are a storage system for weapons and potions in a video game. It's a very utilitarian approach to "the magic of reading", and quite disappointing. (Later in the book, things get more interesting, but it takes about half the novel before things start to intrigue at all).