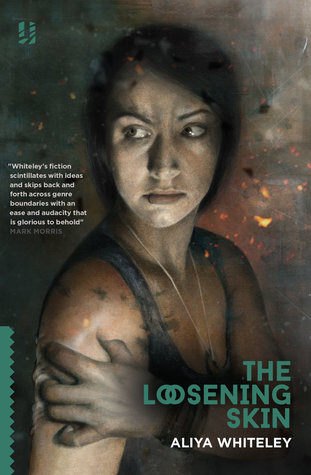 The Loosening Skin is another very smart, high concept,  immersive novel by Aliya Whiteley. She is truly one of the most original talents writing speculative fiction at the moment.

We follow the story of a woman who sheds more than just love: she reinvents herself after every shedding. She's been a soldier, a bodyguard, a private investigator, a charity shop clerk. We get her story in 2003. 2005. 2006. 2013. Then, to her surprise, it's her shop clerk persona who is hired to investigate perhaps the greatest mystery, a locked room heist that should have been impossible...

Aliya Whiteley is brilliant at writing authentic, human characters. They're not usually heroic, but they might be involved in larger than life situations, albeit in a slightly selfish, slightly flawed, not always in complete control kind of way. No matter how strange the premise of her worlds are, the people who live there are always recogniseably, convincingly human.  So, too, in The Loosening Skin.

I pretty much devoured the whole book on a long train journey. It was mesmerising and evocative, as Whiteley's writing always is. It did get unsettling at times, but the sense of the uncanny was less all-pervading than it was in The Beauty (her masterpiece so far). However, the switches between third person and first person, the non-linear structure, and the final third of the book, jolted me out of the story a little. In fact, I felt the second ending, or the extended epilogue, wasn't really necessary: the story had ended, and then we got a new perspective, a sequel of sorts, stretching the novella into a novel-length book, but not, in my opinion, into a better whole.

Even so, if you want to experience a world that is very different and yet very recogniseable, and horror of the most human sort, The Loosening Skin is first rate speculative fiction, by a world class author.