The Beauty by Aliya Whiteley 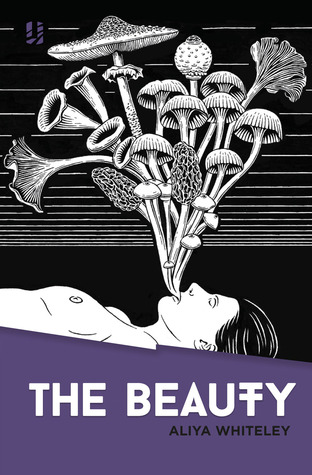 The Beauty is a short novel / long novella. It's postapocalyptic, it's horror, it's science fiction and it's unlike anything I've read. It feels almost insulting to use those genre monickers. It's simply unique.

The Beauty starts years after all the women have died. Men and boys have survived, seemingly unaffected by the bizarre fungus plague that wiped out womankind. Our narrator Nate is a youngster, living in an isolated commune. Even before the plague, they'd lived apart from mainstream society: a group of hippies / nature-worshippers who set themselves up in a nature reserve. (I read this story in Cornwall: somehow I kept imagining it set in an emptier version thereof)

Nate is the storyteller of the group. His role is to tell stories each night, keeping memories alive through the oral tradition - and helping the men and boys continue to see worth in life.

One day, he notices that there are mushrooms growing in the graveyard, where the women are buried. Soon, those who touch the mushrooms disappear. Nate goes to search for them. Then, he, too, disappears for a while, in an earthen cavern, held prisoner, visited by a strange figure whose arrival will change their society forever...

The story has four parts / acts. Each is atmospheric, rich and almost a novelette of its own. The mood shifts from melancholy to uncanny to outright horror. There is a lot that's interesting about The Beauty, not least of which is the gendered way in which the story is likely to affect people. I suspect that men will find it more unsettling than women. I certainly felt uncomfortable at times.

It's not just a story about uncanny horror, however. It's also a story about group dynamics and power. Nate is one of the younger men in the group. He's not exactly the omega male, but nowhere near the top. The inofficial leaders / alpha males occasionally instruct him which stories to tell, and so we understand who runs things. Over the course of the book, power shifts, several times. Nate's soft power, built on reimagining their past and mythifying their own history, and later on, painting possible futures with his words and getting ever more driven towards giving people a sense of purpose, helps him influence and shape things at times. Rhetoric and dreams make him a shaman-like figure, while the others occasionally grapple for leadership through control of force. He's all hearts and minds, the other candidates for leaders are all shock and awe, and occasionally, there are frictions between factions...

What this review fails to capture is just how rich and atmospheric the book is. It handles the uncanny and horror with such confidence. I'm not sure it could ever be made into a movie, but if so, Guillermo del Toro (who made Pan's Labyrinth) would have to direct.

Quite simply, The Beauty is a stunning achievement.