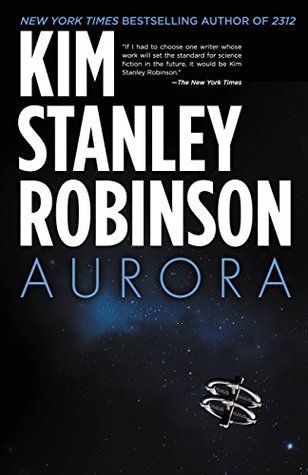 Aurora is a convincing novel about interstellar travel. Forget faster-than-light and other magic: we meet our spacefarers about twenty years before they will reach their destination, and over 150 years after their great great grandparents set off. They are twenty light years away from Earth: communication is two strands of one-way streams passing each other in the dark. There is no possibility of dialogue. Their spaceship is made up of a central spine and two cylinders of connected 'biomes' - each of which is the home to one replica of a climate region from Earth. Their mission is to populate an Earth like planet, twenty light years away.

After 160 or so years, the society on board the ship is rigidly managed by a committee. The biggest threat is human population growth, so procreation is strictly regulated (while attitudes to recreational sex are generally relaxed). Their ship has its own history, with mysteries and past upheavals casting shadows into their present and into the future.

The ship and its habitats are showing signs of wear and tear, and despite the engineers' best efforts, it looks like the ship could not go on forever. The differential evolutionary development speeds of all the different life forms aboard are having odd effects - their ship is an island in space, but even that analogy is not completely useful.

Devi is, effectively, the chief engineer, even if she insists that everyone is equal. She's extremely competent, respected throughout all parts of the ship, serious and constantly, quietly fretting over the myriad little problems that beset their ship and its habitats. Her husband Badim is a counterpoint: calm, warm, and a solid source of support to her and their daughter, Freya.

Freya is the hero of the story. We meet her as a child, taller than most adults already (she will grow into the tallest human aboard), curious and adventurous, a bit naive, and, in her mother's eyes, mentally slow. At night she sometimes sneaks out of her room to eavesdrop on her parents' conversations, and she feels the acute agony of her mother's judgement and generally distant demeanour.

Freya goes through a coming of age rite - to walk the ship, explore all the biomes of both rings and meet all the communities aboard - while the ship slows down to be able to stop when it gets to their destination. Devi keeps trying to fix the systems so everything stays in equilibrium, battling material decay, system imbalances, and the progression of time.

Meanwhile, Devi asks the ship to tell her a story: the story of their journey. The ship, run by a quantum computer, struggles with this assignment: a human narrative requires a near-human mind. Devi has been programming and instructing the ship to self-programme her entire life. She has turned a quantum computer running static software routines into a dynamic self-improving system, and now, asking it to make its own programming ever more flexible, she has started shaping the ship's software into something that it becoming a mind, a personality, a self.

Aurora is a thought through, convincing novel. Freya is the heart and soul of the story, and it is gut-wrenching to see her suffer on several occasions. The ship is the counterpoint character, a very introspective mind that constantly questions language and logic. At times, the story moves quickly and the narrative becomes a summary of developments. At others, the narrative zooms in. It's not always clear who is telling the story - at some point, it seems as if the novel has been written by the ship, while this later turns out not to be the case.

As a hard science fiction novel, it's perhaps unsurprising that it takes its ideas and its thoughts very seriously, while the characters are a little bit secondary. The population is made up of regular people, with very few being outstanding or particularly unique. Devi, yes, but everyone else is a little more flat. Freya is a person the reader gets attached to more because we see her grow up from childhood to adulthood and beyond, rather than because she is uniquely heroic.

Devi probably has a more complex internal life than she ever lets anyone see - even the reader can only infer her thoughts and emotions; she keeps her own counsel. If you are looking for a novel that is fun and light, full of adventures and iconic characters, this is not the book for you. If, on the other hand, you want to read a book that mulls interstellar travel as seriously as it can, and which comes up with a very realistic scenario, then Aurora is well worth your time. It's never boring, but, conversely, it rarely gets very exciting, either.

It's hard SF, based sufficiently on science for it to seem possible. I found it interesting and compelling: a solid accomplishment.