The Silence by Tim Lebbon 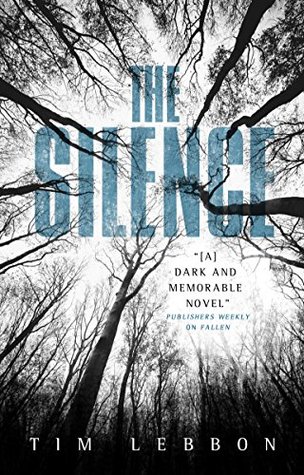 The Silence is a creature feature horror novel by bestselling author and South Wales local Tim Lebbon. Besides the very atmospheric Thief of Broken Toys, I haven't read much of his work. (I tried Coldbrook, but zombie apocalypse is probably simply not my thing)

Ally is a teenager, living a fairly normal life in a town in Wales. She's lost her hearing in a car crash that killed her grandparents, she has an annoying little brother, and she's inseparable from her iPad, which she uses to collect information about the world she reads about on the news.

One day, she skips through TV channels to arrive at a live broadcast on the Discovery Channel that captures her attention. Explorers are abseiling into a cave system that had been isolated from the surface for millions of years. Then, shockingly, things go very very wrong, live on TV...

The monsters in The Silence - named vesps - are blind, bat-like carnivorous reptiles the size of cats. They are monstrous because they swarm, spread and procreate very very quickly. Once unleashed, they flood across the continent like the beasts in Pitch Black, drawn to every sound and killing through sheer numbers. The only way to survive is to be very, very quiet.

The novel is a solid thriller: we follow Ally's first person journal and her father's journey to return home while they hear about the spreading plague of monsters on the news. Then, we follow the family as they try to flee to somewhere quiet and isolated as the plague turns apocalyptic, approaching Britain with frightening speed.

As is often the case in horror novels, the monsters are not the only threat, not by a long short. People in despair and madness can be just as dangerous, perhaps even more so. The critters, in comparison, are a lot more predictable.

I picked The Silence because I wanted to read something scary. Is it scary? I didn't really think so. It's thrilling, yes, and entertaining, well written, interesting... but scary? Not really. I'm still looking for a novel that will terrify me as much as the scariest movie of the millennium, El Orfanato, did. (Any recommendations for genuinely scary books? Please tell me in the comments!)

There's one annoying goof / discontinuity in the book: clearly, the author had decided to kill off a character, and then decided to make the scene a bit more drawn out. Not a bad idea, except describing the horrible injuries as 'The face was a mess. (...) The red maw of X's shattered mouth opened in a silent scream' - and then, a mere few pages later, having dialogue with that character in the story makes no sense. Able to talk normally despite a shattered mouth, a face that's a mess? The copyeditor should have paid closer attention...

I keep meaning to try Lebbon's work -- this is encouraging!

He writes a lot, including various movie tie-in novels. I tend to find the blurbs of some of his books a little uninspiring, but The Silence is a solidly entertaining book, and while opinions about Thief of Broken Toys are very split, I found it rich and atmospheric when I read it.