The Liars' Gospel by Naomi Alderman 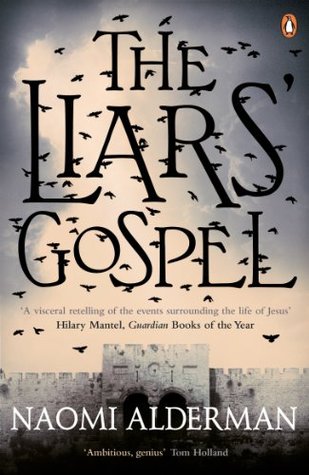 The Liars' Gospel is an intellectual exercise. It asks a very simple question: what might have happened, around 2000 years ago, to cause the later rise of Christianity / to turn Jesus into a mythos and God?

It is a thought experiment. Jesus - Jehoshua - is not the protagonist of this story. He is very present, as all three narratives are tangential to his own, but our protagonists are Myriam (his mother), Yehuda of Qeriot (Judas of Iscariot), Caiaphas the High Priest and Bar-Avo (Barrabas the murderer).

When I started reading the book, I expected those narratives to intertwine, to be interconnected, to pull together and, because of the title, I expected someone to start conspiring, to start forming gospels, to intentionally lie... and in the first story, there is a follower of Jesus (who also makes a brief cameo much later), and so I thought he would be crucial to the book, he'd be the author of the myths.

My expectations were wrong. This novel is comprised of separate narratives. Their intersections are so brief and tangential that they are fundamentally irrelevant.

Our first tale, Myriam's story, starts a year after the crucifixion, allows itself a flashback or two to Jehoshua's life, but is essentially the story of a woman who has to continue living with a certain trauma, and occasional reminders of her dead firstborn son.

Our second tale, Yehuda's story, also starts after the crucifixion, also allows itself some flashbacks, and is the story of a man who has the faith equivalent of bipolar disorder: he is fervently faithful, loses all faith after a crisis, rediscovers faith (as Jehoshua enters his life), has doubts, ... He's a conflicted kind of guy. And he's an intelligent, thinking guy, who does not follow unconditionally. It is his ruminating nature which dooms him to lose faith again and again and again.

Caiaphas is a high priest with marital troubles (jealousy) and a dose of lust for a young girl. His life also intersects with Jesus' very briefly. Mostly it is a story of a man whose personal life is troubled, and whose public life is all about playing politics. He was difficult to like. His story was all about big-picture exposition, and little-picture jealousy. It was the least memorable narrative.

Bar-Avo, meanwhile, is an alpha male, a physical, rebellious lad's lad; a man who knows how to party, how to fight, how to buy friends and how to stir up trouble. He swashbuckles his way through life like a pirate with a cause. His story starts long before Jesus, and the crucifixion episode is merely a brief part of his life story.

Four stories, four lives that intersect with Jesus', but Jesus himself is a shadow, an unknowable character. We hear everyone else's thoughts and interpretations, but we're never invited into Jesus' head. And rightly so, but it means that we are presented with four different Jesuses, each as much of a product of the way he is perceived by our current protagonist as a character of his own. Naomi Alderman's Jesus comes across like he has Asperger's Syndrome, but also flashes of personal magnetism. But they are flashes only, nothing sustained, and so it becomes hard to believe that he would have any following at all, let alone a few hundred followers...

There is a lot to praise about this book. The writing is elegant and slightly ornate - I found the writing voice beautiful. (In my experience, that means some others might dislike the style for being a bit purple prose-y. I think those others would be wrong: the writing here flows with flair. The beautiful phrases do not slow it down). The book is a work of intelligence and thought. Each narrative is quite believable - although Bar Avo gets to have a perhaps somewhat too swashbuckling life.

However, there are also flaws. The biggest problem is that the book is just too self-consciously clever. As beautiful as the writing is, and as interesting as the thought experiment is, this book often feels like it has a bit of a smirk on its face. It's a bit too smug. Bar Avo sounds like any Hamas or Islamic Jihad leader at times. The Romans act in every way like Zionist Israelis today. Such parallels are laid on quite thick. The recurring theme of Jesus' disappeared body is a playful gimmick that never really has any pay-off. We get some quotes from the Bible, used by characters other than Jesus, and we're supposed to cleverly chuckle at the fact that all these different moments and quotes got attached to one man, who said barely anything coherent at all... but there are no chroniclers in the book, no gospel makers. Some of the quotes are out of character to the new characters they are assigned to. I get the literary intention and the thoughts behind these things, but at those moments when the book is cleverest, it also stumbles and chokes and jars a little, because it disrupts the flow of a narrative.

It's like jokes: writers of humorous stories often spend a lot of time and energy setting up a wonderfully witty, spectacularly funny moment. Think Douglas Adams, here. And then, as we wipe the tears of laughter form our eyes, we read the next sentence, and the story picks up again where it left off. Fine. But The Liars' Gospel isn't funny. It spends similar time and energy setting up a moment, but there is no relief through laughter. Instead, there is an "a-hah", but not even with an exclamation mark, not a major plot twist "OMG!", but a sort of polite and clever and mellow "oh, I see what she did there, isn't she a clever one?"... and then the story picks back up, and you feel a little deflated because you just had a literary hiccup, not a guffaw, not a heart-stopping twist, a clever polite little hiccup, and that's what all that lead-up was about?

All in all, an interesting, clever, pleasant thought experiment, beautifully written, but just a little bit too focused on being clever, and a little too disjointed to be fully engrossing. Pleasant, rather than great.