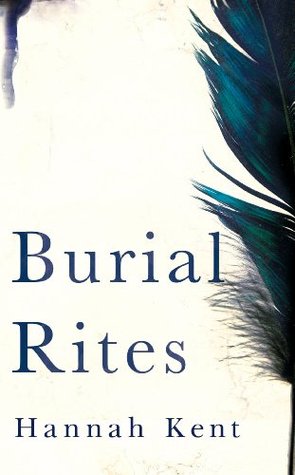 Burial Rites is the story of a condemned woman, spending a few months living on a farm in Northern Iceland while the local officials await final confirmation of her death sentence.

It does not sound like the sort of book I'd usually read, but somehow, the blurb got me. The subject matter is inherently dramatic in just the ways that movies about condemned people aren't. I have never felt empathy with movie characters waiting for executions, but this book got me close to weeping. (As did In Cold Blood, but that is another story). Books are simply better at this: you spend more time with the characters, you spend time in their heads, you project your own imagination onto them, and that makes them a part of you, so you somehow have a share in their protagonist's fate.

It's a very fast read. At the start, it's easy to like some characters (Agnes, because we get first person narrated scenes with her, and the novice priest, and the awkward but honest sister), and to dislike some others (the gossip, the district commissioner, the prettier, socially less awkward but more judgemental sister). As the story progresses, Agnes gains in complexity - and so do some of the other characters. (Not all of them: but enough of them to make the book worthwhile).

The book evokes 19th century Iceland, and life in rural isolation, very well. It has seasons, and claustrophobia, and a real sense of a tiny island nation.

It's a n engrossing book, written in atmospheric and rich prose. When we are in Agnes' head (her scenes are written in first person), we encounter a poetic mind, describing the world and events and thoughts deftly and richly. Those who are wont to cry "purple prose" at the slightest provocation might need to be a little wary, but for me, the prose seemed beautiful.

All in all, it's a beautiful, very well-written novel. Engrossing, emotionally exhausting, atmospheric, and for the very biggest part, authentic and believable. I wouldn't recommend it for light, fun reading, but if you're in the mood for something hard, cold, and beautiful, then this novel is definitely worth a read.