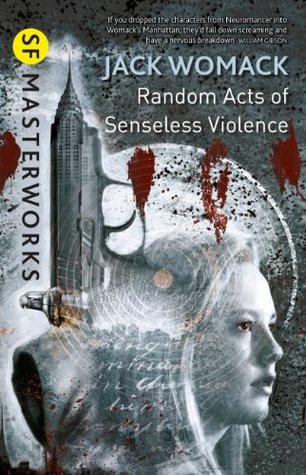 Random Acts of Senseless Violence is a novel in the form of a diary of a teenage girl living in New York. She receives it as a birthday present, and chronicles the next six months of her life. They are eventful six months, both for her, personally, and for the wider US: caught in a long-term recession and decline, stability is crumbling and pockets of violence and societal collapse are forming at the edges. Her own family is just about to descend from lofty upper middle class to struggling working class, as her parents' exuberant and careless spending habits and debts catch up with them.

It's a bit strange to read Random Acts of Senseless Violence. It was written in the mid-1990s, before the internet and mobile phones became truly universal, yet set slightly in the future, without any real technological advances. In some ways, this enhances the novel: it does not get caught up in the blips and fads and things that are quickly replaced in our lives. No Twitter and Bebo and Ello to be found. This makes it more universal. On the other hand, it makes it feel slightly old-fashioned, as characters rely on landline phones in ways that now feel entirely alien to most readers.

The universal feel makes the authenticity of the story - and its prescience - all the more unsettling. Our protagonist's family tumbles from debt-bubble-financed luxuries down to a fragile, easily exploited situation, and as reader, you realise just how precarious their situation was just before the tumble began - and just how rapidly things are sliding out of control. The downward spiral is mirrored - or perhaps caused - by the terminal decline of the entire US economy, but of course, our teenage narrator only perceives tiny glimpses of the wider world in her diary, snippets from the news and overheard conversations and adults' anxieties. We're presented with adults who are over-medicated, stressed to near-breaking point, and a sense of widespread, near-universal mental ill-health. Adults are cracking up, and the children are not sure what to make of it. At one point, our narrator notices that adults seem to be all crazy, and comments that she can't afford to get any more crazy herself.

Meanwhile, there's the matter of puberty (the diary carefully notes each instance of her period, as a teenage girl perhaps might), and sexual awakening, and peer pressure, bullying, domestic abuse, isolation...

Random Acts of Senseless Violence is a masterpiece of writing craft: its characters and story developments are absolutely believable and authentic, echoed worryingly in things that have come to pass in recent years: the debt bubble, recession, collapse of the Rust Belt / Detroit and New Orleans, the riots in London and the Occupy Movement, the political leaders who seem impotent to turn things around and who look increasingly haunted by their own impotence, holding on to power despite widespread disillusion and protests... but a much more compelling feat of writery craftsmanship than its prescience is the gradual, subtle and entirely radical shift in the narrative voice. This teenager is meeting new people, and her vocabulary, her sentences, her speech patterns, her entire language changes. At first, she simply reports the dialogue, but slowly, one tiny step at a time, her own lines of dialogue, and then her entire writing voice, shift, until by the end, you are reading something which is unrecognisable when compared with the start. The later diary entries are the writings of a different person who somehow emerged by coming of age in that time and that place and through those events...

...all of which does not mean the book is actually fun to read. It is enormously talented, clever, a masterpiece of craftsmanship - but the sort of work you appreciate, rather than enjoy. I cannot praise the genius of the book highly enough, but I can't claim that it made me feel good while I read it. And, to me, the entire point of reading is about enjoyment (even if a story is dark or harrowing). This book is simply a bit too relentlessly troubling for me.