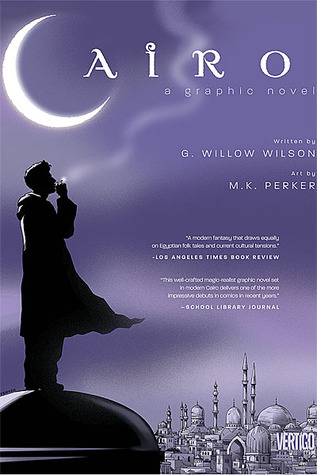 />
Cairo, a graphic novel by G Willow Wilson, is in love with Egypt and the Middle East. Written a few years before Alif the Unseen, the story predates the Arab Spring, but has similar flavours to Alif's tale. Cairo, too, is a story of jinn and myth, fluidly intermingling with modern life in an Arab city.

The plot of Cairo revolves around an ensemble of (mostly young) characters. A young Californian woman who wants to work for an NGO in Cairo to escape ennui. A drug runner who shuttles between Cairo and Israel & Palestine. His sister, a belly dancer, and his best friend and her fiancee, a column writing journalist. A young Lebanese American on his way to try and do something he thinks would be meaningful. An Israeli special forces soldier who finds herself on the wrong side of the Egyptian border. All their fates become linked through a jinn and the vessel he has been bound to. The jinn, meanwhile, is on a quest of his own, pursued by an evil warlock...

At times, Cairo feels like 'Avengers Assemble' - it's a story of how these very different characters with different objectives find themselves on a road to a shared heroic adventure. There's some sense of humour, but it's quite wry compared to other comic books. What sets Cairo apart from other comics is the setting and the richness of its character detail. This is a graphic novel for grown-ups. That doesn't imply it has sex in it - it doesn't - but it does not talk down to kids and the heroes are distinctly complex people. In many ways, Cairo reminds me of Neil Gaiman's Sandman: it has a similar richness of myth, complexity and people.

If there is a flaw, it's that Cairo is perhaps a little too much in love with the Middle East and with Islam. It offers up a slightly rose-tinted view of the region. The same applied to Alif the Unseen: as a convert to Islam, G Willow Wilson does occasionally allow herself a devout moment. In Cairo, there is one scene that stands out for feeling forced, when a character is given a Qu'ran and his eyes light up with some sort of understanding... That is not the only moment that made me think a writerly cheat / shortcut had been taken, but it was the one that jarred the most.

As a graphic novel, Cairo has a distinct visual style. It's very cinematic, especially in its transitions between scenes, which mimic movie editing. The artwork is lovely (again, reminding me of some Sandman issues), though not as sumptious as the gorgeous (but sadly misogynist & racist) Habibi - which is the highest visual benchmark I have come across for Middle Eastern themed fantasy graphic novels.

I would highly recommend Cairo to readers who enjoy (urban) fantasy and graphic novels.