Book Review: The Blood of Angels by Johanna Sinisalo

I'm attending Wolrdcon in Helsinki this year. After Loncon, which I loved, I determined to visit every Worldcon I can (or rather, every Worldcon that does not take place in the US, because I'm not interested in going through US immigration / airports / TSA stuff). 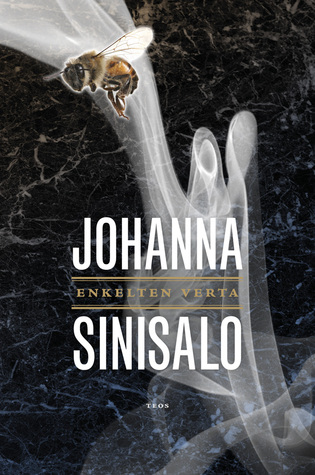 As excited as I am about Worldcon, I discovered that I've never actually read any books by the Guests of Honour. So, with just a few weeks to go, it seemed a good idea to do some catch-up reading. First, I chose The Blood of Angels by Johanna Sinisalo. (Reading something written by a Fininsh native seems only polite when attending a convention in Finland).

Enough preamble. The Blood of Angels tells the story of Orvo, a Finnish hobbyist beekeeper, in a near future. In this future, Colony Collapse Disorder (where entire bee colonies disappear from hives without a trace) has become Colony Collapse Catastrophe in America and several other regions of the world, but not yet Finland. The world's agriculture industry is in growing disarray: without its most effective pollinators, entire types of crop are failing, and this has knock-on effects. One day, Orvo finds one of his hives empty. As he recovers a dead queen bee, there are flashing blue lights outside, and then things become... interrupted.

The Blood of Angels is a novel at the literary end of science fiction. Don't expect pulpy heroes, grand adventures, dystopia. Instead, Orvo narrates his story, day-to-day, as memories (flashbacks) interrupt him and take his mind to places it usually does not want to be. We learn about his world gradually, one memory and one event at a time.

Pretty early on, it's clear that something dramatic and ominous has happened in his life, but Orvo shies away from thinking about it because his mind can't process and cope. Meanwhile, he reads through the blog posts of his activist, vegan son, and discovers that the attic in his barn has a door to another universe... but even that portal is understated; the other universe not all that 'other'.

This is a thoughtful sensitive novel. It's written with great authenticity and skill. The story walks the tightrope between very grounded, realistic personal drama on one side, and science fiction, mythology and portal fantasy on the other, in a way that is engrossing and rewarding for the reader. The story never becomes boring, and though it takes itself seriously, it never commits that gravest of sins of being too up its own a**e.

It's not a beach read, but The Blood of Angels is definitely worth your time. Well-written, intelligent, authentic and rewarding. I can see why Sinisalo is a GoH at Worldcon, and I intend to read more of her books in future.

Huh, that's high praise from you. I'll have to check this out.