Review: And the Ocean Was Our Sky by Patrick Ness and Rovina Cai 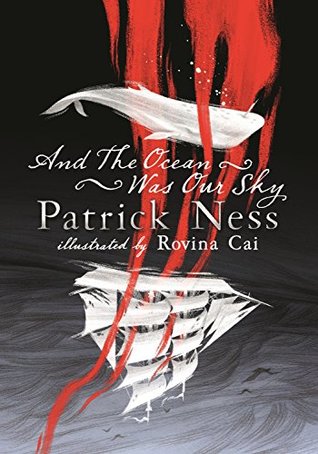 And the Ocean Was Our Sky is a beautiful looking book, by a wonderfully talented author, written as a fantastical counterpoint to Moby Dick. Unfortunately, it did not live up to its promise, for me.

"Call me Bathsheba", the story begins. As a story about a group of whales who hunt humans, led by a captain whose head still bears the harpoon that has been launched into it, you would be forgiven to think that these whales live in our world, that their ultimate quarry will be Captain Ahab. Before long, however, that suspicion is shattered: the world of the story is fantastical. Gravity points towards the surface of the sea, up and down are reversed underwater, and these whales travel with ships (which they build from wreckage), build cities, perform surgeries, and war with humans.

The whale ships, especially, took me quite a while to get used to.

One of the key themes of the story is destiny: the whales have a belief system that centres on 'prophecy', so they see prophecy wherever they look. Our narrator, Bathsheba, is different. She does not quite believe in it. Yet she becomes a hunter because of her grandmother's prophetic declaration that she would, and she joins fierce Captain Alexandra  and her crew in order to hunt man.

Despite being more or less a fan of Patrick Ness, this book baffled me greatly. The writing is good, but the premise is very weird. Rovina Cai's illustrations are wonderful throughout the book, and they make a huge contribution. They create atmosphere and drama and awe where, if I'm honest, the text fails to. I think what really scuppers this tale for me is that the whales do not read like whales. Stories about animals always risk falling into the trap of losing the reader when the animals feel too human, or not human enough. The whales in this story are far too human for this reader.

Finally, the grand finale of the story was a huge disappointment for me. I won't go into detail as to why, but this particular reader felt badly let down.

And the Ocean Was Our Sky is a strange novella. It is beautifully illustrated and the book is a stunning object, with heavy paper, a subtle, elegant font, and seemingly a labour of love. It is not the story you're led to expect by the cover blurbs, and some readers will struggle with the fantastical world and the plot that are presented here. It's a lot weirder than you might think.

Rating: 3/5 (which is lifted quite a bit by the artwork)