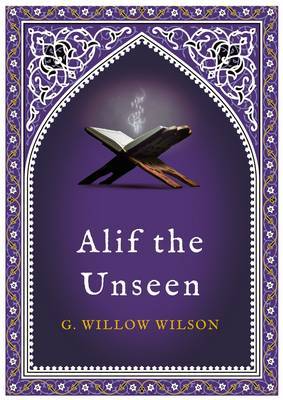 Alif the Unseen is the story of a teenage hacker living in a generic Arabic emirate somewhere in the Gulf region just before the Arab Spring. He's good with computers, but immature, and useless when it comes to girls.

When, after some girl trouble, Alif creates a clever little trojan that can identify a person online regardless of which device, handle, or website they use, and make them invisible to the person using the computer, he unwittingly makes himself the target of the state security forces. Add to that a delivery of a cryptic book of fairy tales (The 1001 Days), and the ominous realisation that his ex-girlfriend's future husband might just be the chief of the secret police, and things are not looking good at all for Alif...

Things come to a head. Alif, together with Dina, the devout girl living next door, have to run for their lives, stumbling into the realm of Vikram the Vampire and the djinn.

This was the second time I read Alif the Unseen, this time with Passau International Book Club. It was interesting to compare the book as it is with my memory of it. In my memory, this was a contemporary fantasy novel, filled with djinn and mythology and grand adventures. In reality, this book has a fairly slow start, gradually approaching the supernatural and slowly immersing its characters in their adventures. For a good while, this is simply a book about a stupid teenager being annoyingly stupid, in the Middle East.

As ever with G Willow Wilson, it's also a book about Islamic culture. In the graphic novel Cairo, she wrote about Egypt and featured a young American tourist who ended up much more immersed than she'd ever expected. In Alif the Unseen, she wrote about Muslims of varying degrees of devoutness, and the story features a young American woman who has converted to Islam (as the author herself has done). It's hard not to see the American characters are being a kind of avatar for the author, and the books as a bi-product of her own life journey.

Alif the Unseen is not an uncritical look at the people and cultures in the Gulf region - but it is very intentionally a book that is infused with religion and Islam. The most sensible and good characters are also the ones who are more devout, while all the mess is created by non-devout Muslims who play lip service to their religion. Characters have little rants about Philip Pullman's Northern Lights, or Western hopes of an Islamic Enlightenment.  In the world of Wilson's stories, Islam is Good. To give her credit, not-Islam is not Evil, but as a reader who views all religions as aberrations and poison, the obvious fondness for Islam in the book was a little annoying.

But, as I said, Wilson is not uncritical of the problems that beset Arabic cultures. Race and racism is a huge issue: Alif is a half-breed, with an Arab father and an Indian-born mother. Dina is of Egyptian descent. Both are not very high up the racial pecking order. Misogyny is a huge problem. Alif is basically a sexist little shit at the start of the story (though no more so than Western teenage boys were back when I was young, and presumably still are). The difference is that one gets a sense that growing out of misgoynystic thinking is distinctly more optional in this culture than it is in the West. (Well, then came Donald Trump and his "boy talk" and we are all reminded that some people's minds never move beyond the most puerile and sneering versions of themselves). The book even touches upon the fetishisation of women's virginity that is still a blight on women's freedoms in Arab countries.  Alif the Unseen shows the real world pretty much how it is, so it's a relief that much of the book is filled with magic and the mythical.

If you can stick with a gradual beginning, rather than the plunge-into-magic that most contemporary fantasy novels now employ, Alif the Unseen is absolutely worth your time. Its setting is different, authentic, and interesting. The book might have some religious themes in it, but it's a jolly good read, filled with authentic characters, some of whom grow over the course of the novel. And it's filled with adventure, dancing on the tightrope between scary oppressive regimes and magic and monsters. Best of all: this is not a grimdark, cynical, bitter book. At its heart, it believes in goodness in people, which makes the book a joy to read.