An Instance of the Fingerpost by Iain Pears 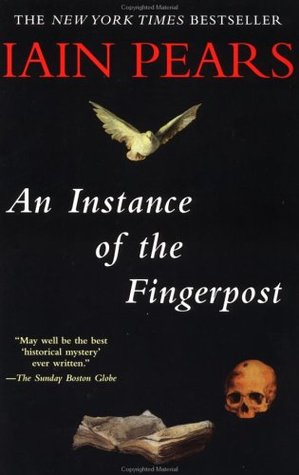 I wish I remember how I came to buy An Instance of the Fingerpost- I have a vague suspicion it might have been an Amazon recommendation, but I am not entirely sure.

At any rate: I bought it. I read it soon after buying it. I found it incredibly rewarding and enjoyable to read - one of the best books I've read, even though much of it went over my head.

An Instance of the Fingerpost is a historical novel. Many - indeed, most - of the characters are historical figures. Some of the key characters are fictitious, or heavily fictionalised versions of real people. And the events in the book are using history as a springboard rather than a millstone - much of the plot at the heart of the novel is entirely imaginative, rather than factual.

The book comprises of four narratives, one after the other. Each narrative recalls the same period of time, in Oxford, when a series of events happened which left their mark on all the narrators. The first story is that of a man called Marco da Cola, a rich merchant's son from Venice, in England to look after business interests and try his hand at experimentation and discovery. Drawn into the lives of an elderly woman and her daughter by accident, he tries to act as a physician for the (badly injured) old woman, and, in the course of his story, does an experiment which he wishes to regain credit for - because, through betrayal, his role has been written out of history. And then there is a suspicious death, and the plot thickens...

The second and third narratives are written by much more sinister men, with evil deeds they admit to (and suspicions about others). Each reveals a new layer of the events covered in the first. The final narrative tries to pull it all together, and present a new picture entirely...

Each of the narrators is unreliable. Each, of course, thinks he has the monopoly on truth, righteousness and rightness. And each fills in the gaps of things he does not know with assumptions, guesses and suspicions. The second and third narratives are positively dripping with paranoia an venom. The first is comparatively more jolly, and the final one more keen on facts and less keen on interpolation. That said, the final narrative is by far the most... fantastical, shall we say?

The writing is masterful, in my opinion. The tone is perfectly plausible and authentic enough to give the story atmosphere, without being slavish to 16th century language. There is significant wit and a very dry, dark sense of humour in the telling of this tale, made all the more delightful because none of the characters are being intentionally funny - they merely have conversations and make observations which a 21st century reader would be very very amused by, while being perfectly earnest. Punchlines are never delivered at the end of a sentence or paragraph, but in the middle of the flow of the dialogue or narrative, and so the overall effect is much more witty, in my opinion.

In terms of historical characters, I confess to knowing next to nothing about all of them. I have a very vague inkling of Cromwell, but no real understanding of that period (or any period) of English history. The religious jostling is perfectly beyond me: I have no idea even today what the big differences between Christian denominations are. Oh, I know Anglicanism was founded to permit divorce, and Evangelism / Protestantism a backlash against the centralised Catholic church, and I know there are some differences (confession, Lent, yadda yadda yadda), but to me as an outsider, it is inconceivable that all these minor details would matter in the least. So when the narrative speaks of Catholics, papists (the same, I gather), Anglicans, Protestants, Jesuits, Methodists, Quakers, etc. etc. etc. - I simply do not understand the religious differences, nor do I always follow the historical import of any particular faction's actions / conspiracies. That is probably why the second and third narrative are less engaging than the first - these are the big political sections. The first and last are much more focused on a life-or-death drama about individual characters that earn the reader's compassion, empathy and care. The second and third narratives, while involving individual struggles, are much more about blinded, furious men with bitter hearts, hot obsessions but coldness where any notion of compassion might be...

Much as I loved the writing, and the authentic detail, there were bits when I skim-read and got a little bored. Each narrator spends time swearing his honesty and trying to win over the reader to his view of events, and the wheedling, authentic as it may be, grates. Similarly, sometimes characters would start philosophising about stuff which matters little to me / the reader, and those sections, too, can tire. The constant one-upmanship of using quotes from the Bible between different characters is diverting and amusing at first, but by the end, you sort of want all of them to think a little more about the world and a little less about which quote is the most useful riposte...

Even though I did not always understand every nuance, I believe I understood most of the plot. The number of characters was so staggering I often lost track of which named person was suspected of which deed in which conspiracy, but I think that did not detract too much from the tale, for the paranoid bits are a bit frantic in their suspicions anyway. The real heavy lifting, in terms of reader engagement, are done by the first and the final narrative, and I will admit, the first left me with a night of very poor sleep as its conclusion was quite harrowing. The final narrative and the way the story is pulled together is ... definitely elegant, and pleasant to read, but also quite difficult to reconcile with this particular reader's willingness to suspend disbelief. I guess I can just assume that our final narrator, too, is unreliable - as unreliable as all the others, and merely presented as the most convincing because his is the final account, and because he is able to address things mentioned in the other three narratives and put the final word to it.

I would certainly count this as a masterfully written novel, and a masterfully executed concept / idea, and one of the best novels I have read. I found it very rewarding, even if not all aspects appealed to my own sensibilities.

There seems a lot wrong with this book for it to get five out of five, best book ever read kind of rating. But then, I think we've had this conversation before.

Indeed, it's a discussion we've had before.
I do think a book can be great - even among the greatest - while still being flawed. It all depends on the impact it has on the reader. This one had spectacular first and last quarters, with a middle section that was a bit sub-par and boring in comparison. It still had a massive impact when I read it, so I think it's a Very Good Book.