My Real Children by Jo Walton

Patricia is a senile old woman in a care home, struggling with Alzheimer's and her disappearing memories. But Patricia isn't like other people: we soon discover there is more to her confusion than memory loss. Those memories which she has contradict each other. It's not just memory loss, it's memory intersection - and she appears to remember two different lives. 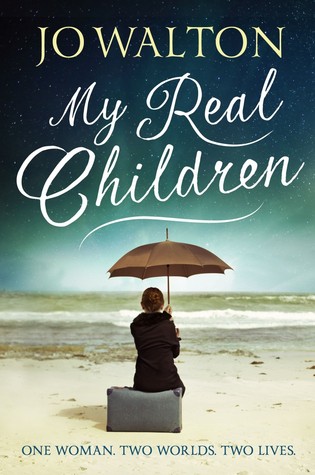 After the (brilliant) first chapter, My Real Children follows Patricia's life (lives) in sequential order, from childhood, through to the decision after which her life went down two different paths, and all the way back to the care home. It is a journey through the twentieth century as it was, and as it might have been. Most of all, it is a saga of a life - no, two sagas, of two very different lives, in two very different worlds.

Life sagas are not usually my thing. It's a genre that tends to drift towards the bittersweet and the tragicomic and hefty doses of melancholy and golden-sheened drama. Forrest Gump, the Hundred Year Old Man Who Climbed Out of a Window, etc. etc. etc. ...

... but this book isn't like that. Yes, it zooms through Patricia's lives, sometimes at montage speed and sometimes one key moment at a time, but the split into two lives in two different versions of the 20th century is an inspired idea: the slog of one life contrasts with the bliss of another; the relief in one is mirrored by struggles elsewhere. This removes it from the "picking yourself up again after some setback" formula because we are allowed to see lives that don't have fast ups and downs determined by artificially imposed story pacing, but that have long periods of struggle (or contentment). The ups and downs of story mood do not determine the ups and downs of characters' life events as artificially as they do in other sagas. The lives chronicled in this book are more realistic and authentic because of that.

Meanwhile, some fascinating stuff is going on in the background: world history and political developments don't quite match our own. It is quite rare to encounter alternative history that doesn't have a singular point of diversion (what if X won war Y), but which winds and turns through the same century in sometimes familiar, sometimes surprisingly alternative ways. We know we're in different worlds because of the way the Kennedy presidency ends - but it does not feel as if Kennedy is really the trigger for all the changes that come after (nor does it feel as if the events in the novel affected the Kennedy presidency).

There are many things to love about this book: the ideas, the elements of alternative history, the way a life-saga has been subverted into something rewarding, original and interesting... but perhaps the most compelling is the character of Patricia (and the people she loves): there is a fundamental, deeply embedded kindness to her, and a huge resilience. There are genuinely difficult periods (early Trisha chapters were painful to read), but even at her most oppressed, she has the ability to focus on the things she can do and the problems she can sort out. She is never given to depression, or to brooding with despair, even when her self confidence is badly damaged for a long period of time. Kindness, resilience, open-mindedness and a sort of matter-of-fact approach to everything that happens - there is a hard kernel of positivity, goodness, and something of the good egg about her. She makes the book very easy to love indeed. And she's not the only good egg in this novel.

Unfortunately, the final chapter is... well, I found it a let down. I would love the final chapter to be completely different (although I'm not entirely sure what should happen in it). It ties things up and rounds them off and feels quite out-of-place to me. Until that chapter, my suspension of disbelief was never in doubt, and then it came crashing down, badly.

... but, aside from the ending, it's a stunning and thoughtful, excellent novel.