How Much for Just the Planet? By John M Ford 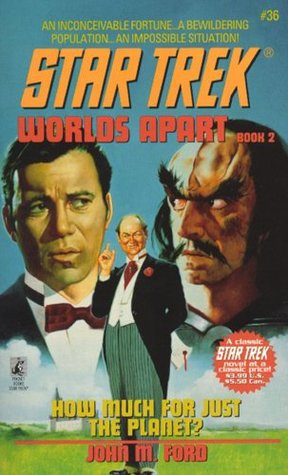 How Much for Just the Planet? is a rare thing – a Star Trek farce.

I’m not a Trekkie, and only now watching the original series on Amazon Prime, so it’s still a fairly fresh universe for me.
Star Trek is not without a sense of humour, and there’s plenty of gentle ribbing between some crew members (Kirk teasing Spock, McCoy and Kirk teasing each other, and occasional flirtations between women characters and Kirk / McCoy). But the comedy is almost entirely made up of repartee. In this Star Trek novel, the comedy is farcical, and while there are a few witty dialogues, it’s the skeleton of the plot itself that is beset with whimsy. Much of the comedy is at the expense of Kirk and his Klingon counterpart, which is not quite that common in the Star Trek things I've seen so far.

The story starts when the Federation and the Klingons simultaneously discover a planet full of Dilithium, an extremely rare and valuable mineral that is needed to power both fleets of starships. The planet is so full of Dilithium that it could power either fleet for generations. The planet is inhabited, and due to a treaty / limitation imposed by Organians, the Klingons and the Federation cannot engage in open warfare. Instead, they have to convince the local population that they would be more “efficient” at managing the extraction process. It is the locals who are supposed to decide who gets the planet.

Of course, the local population is not all that keen on being taken over by either side, so they invoke "Plan C"…

I’ve only just watched the first appearance of Klingons and Organians in Star Trek Season One, and I must admit, the Klingons were a lot more human and jovial than I expected them to be. I’d always assumed the Klingons were meant to be villains (and later, reformed villains with a slightly pompous and serious air to them, like growling Vulcans with anger issues), but the ones I have seen in that episode (and which feature in this book) are all-too-human, with just a slight tendency towards talking admiringly of violence (but not a whole lot of actual aggression - dogs that bark, rather than dogs that bite…)

After a bit of action and adventure at the start, the Enterprise and a Klingon ship find themselves orbiting the planet, both sending down crews to negotiate with the locals. The landing parties are accommodated on different floors in the same hotel, and after a few farcical encounters, the parties are split and find themselves having independent adventures. Each member of a landing party is matched by opposites from the other, and they have different styles of adventures. Uhura and her opposite find themselves embroiled in a Hitchcockian chase; Scotty, Chekov and their counterparts are embroiled in a war satire through the medium of drinking, golf, and landmines (think M*A*S*H);  Kirk and the (female) Federation Ambassador and their counterparts get involved in a comedy of errors that would delight Shakespeare, Mozart and Gilbert and Sullivan.

Oh, and for inexplicable reasons, most of the people on the planet have a habit of breaking into song when telling their stories. Some of the songs are easy to recognise from the lyrics, others almost certainly match famous librettos of Gilbert & Sullivan operas, except I don’t know them well enough to recognise all the tunes.

To be honest, part of me would love to see this book adapted and performed as a movie or theatre piece. The sense of whimsy is strong in this one, but the physical comedy is so exuberant that it would definitely work in a visual / dramatic medium. It (just about) works in writing, but inevitably the pacing is different…

Where it falls apart slightly is the way the narrative intercuts between the different adventures and episodes. Somehow, the plot lacks glue – each adventure is interesting enough on its own, but they feel so unrelated that the different scenes might as well be from entirely different books. Terry Pratchett is a master of handling different comic adventures that interlink and form a common whole - sadly, How Much for Just the Planet? could learn a lot from Discworld, as it is a bit too putdownable.

On the whole, I’d recommend giving this a try if you do like whimsy and musical comedy. I could imagine Hillesque enjoying it (and especially enjoying it as a stage adaptation, if anyone were to produce one)

Note: this is one of the few John M. Ford books that can be obtained as ebook / which remains “in production” so to speak. The bulk of his work is now out of print, with no prospects of reprints being issued for the foreseeable future, due to his death & those managing his estate apparently not being interested in keeping his legacy alive.