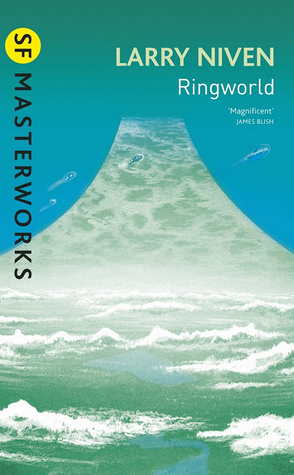 Ringworld is the Cardiff Speculative Fiction Book Club selection for our May meeting, which is taking place tomorrow. I haven't read Nikki's review yet, but I'm sure tomorrow will offer opportunities for lively discussions, especially if any of the book clubbers are feminists... ;-)

Ringworld is a Hugo winning novel. Published in 1970, it's also a remarkably old-fashioned book. It doesn't read like post-New-Wave science fiction. It reads like the sort of book I'd expect from Golden Age 1930s-1940s pulp science fiction.

Louis Wu, our hero, is 200 years old. He's celebrating his birthday when Nessus, a two-headed, three-legged alien, approaches him and hires him to join an exploration mission. Humans have been interacting with different aliens for a while, but this particular species, a Puppeteer, was thought to have mysteriously left the galaxy in a mass exodus, many years ago.

A second alien is recruited into their team: a Kzin. Called Speaker in the common tongue, he's basically an advanced kind of tiger. His purpose is to be the muscle of the expedition. The final member of the team is human - Teela Brown.

After a brief stint visiting the puppeteer exodus fleet, they make their way to their destination - the Ringworld. This is an ancient artifact, an artificial world that encircles a sun, with five artificial internal moons to create nights on the inner surface of the ring. A thousand miles thick and hundreds of thousands of miles wide, the ring has millions of miles in circumference - it's millions of times bigger than Earth or any known planet, with a surface area big enough to sustain every known life form many times over. So, naturally, our explorers are interested in who created it, and why, and whether its creators pose a threat.

But things don't quite go to plan, and their spaceship crash lands. Now they have to find a way to either leave or contact someone to request help...

Ringworld is really a novel about imagining a world. As such, I would expect it to be a complex, staggering world. full of fascination, originality, aliens and wonder...

Well, the main innovation of Ringworld is that it is... wait for it... a ring!

The book goes into lots of detail in imagining how a ringworld would be different from a spherical planet, but that's about as far as the thought experiment goes. It's an artificial world, without geology and with slightly different climate effects due to having no coriolis force. But it's got all the same sort of things that Earth has. Forests, mountains, deserts, oceans. There are curious sunflowers, but other than that, it's a surprisingly, disappointingly mundane world.

The explorers, meanwhile, are fairly simple characters. Louis Wu is there to theorise and figure things out. He talks to himself quite often, so we can hear all the exposition being spoken aloud in automonologues. The Kzin is a barely repressed fierce warrior. Think tame Klingons from Star Trek: The Next Generation. Nessus, the Puppeteer, is cowardly and risk-adverse and manipulative. And Teela is there for sex and luck.

Yes, you read that right. The main female character is only brought along for sex and luck. She has been bred for luck, she's naive, wide-eyed, child-like, kitten-ish and in constant need of protecting and regular need of shagging: little more than a cutesy cardboard cutout of a glamour model.

In fact, there are plenty of quotes that could make people who prefer female characters to be even vaguely like human beings cringe. Or anyone who likes good dialogue, or a vaguely respectful attitude in men.

He was sure now. Teela Brown had never been hurt; had never learned caution; did not understand fear. Her first pain would come as a horrifying surprise. It might destroy her entirely.

The gods do not protect fools. Fools are protected by more capable fools.


Louis decides that Teela is a fool who must be protected at all cost on page 108 or 109. Then, by page 151, he decides she needs to be taught a lesson about pain and lets her walk on hot lava without protection, for her own good. In fact, he tells her as much, on page 157/158...

"You wanted me to burn my feet!"
"That's right. Don't look so surprised. We need you. We don't want you killed. I want you to learn to be more careful. You never learned before, so you'll have to learn now. You'll remember your sore feet longer than you remember my lectures."
"Need me! That's a laugh. You know why Nessus brought me here. I'm a good luck charm that failed."
"I'll grant you blew that one. As a good luck charm, you're fired. Come on, smile. We need you. We need you to keep me happy, so I don't rape Nessus. (...)"

Yeah, the quote goes on, and he makes another few 'jokes'. I guess people in the 1970s must have been different. For some strange and mysterious reason, few of the women I have come across these days appreciate 'lectures' by men, nor 'being taught lessons', nor indeed rape jokes.

He had realized a thing about Teela Brown. She had never learned how to resist. She could not say no and make it stick. She could not deliver reproofs of calculated intensity, humorous or jabbing or deadly vicious, as other women could. Teela Brown had not been hurt socially, not often enough to learn these things. Louis could browbeat her until doomsday, and she would never know how to stop him.


How good to hear that she's not as calculating and vicious as other women. Fortunately, Teela is not the only female character. There is in fact a second one in the book...

"Certainly, she could have done nothing complex nor crucial to the wellbeing of ship or crew. She is not very intelligent, Louis."
"Did you think to ask about the ratio of sexes aboard ship? How many of the thirty-six were women?"
"She told me that. Three."
"You might as well forget about her profession."


Yup. the only other woman we meet in this book is a "not very intelligent" space whore. (If the word 'whore' makes you uncomfortable, I should say that I am using it because Louis calls her that, to her face, later in the book. Not as an insult, of course. Just casually.)

He was on fire. If she pushed him away now, he would use force; he must have her-


Ringworld has not dated very well. It's infused with a view of women that would not be considered very healthy these days, if ever. They exist for sex, to be protected, to be lectured, to be taught lessons, and for more sex. And that's the good ones - all the others are vicious and calculating and say "no" to men too often. They are foolish or not very intelligent. Their main skills and sole purposes are sexual. In fact, late in the novel, after Teela has learnt some lessons and undergone what the author seems to think was character development, we get this little gem, in the middle of a battle:

Seeker was a dangerous, skillful swordsman. The natives knew about swords. Teela stood behind him, safe for the moment in the ring of fighting, looking worried, like a good heroine.


...Because that's what a makes a good heroine who has finally grown up: LOOKING WORRIED AND BEING PROTECTED BY MEN.

No wonder I thought Ringworld had been written in the 1930s or 1940s. I was vaguely impressed with the liberal sex lives alluded to early in the book, thinking it was quite a liberal outlook for something written in the Golden Age. Then I saw it was published in 1970, after the hippies.

This sort of stuff didn't raise eyebrows in 1970? Who am I kidding. In Hollywood, this sort of characterisation still happens now. And probably in lots of contemporary books I don't read.

Thinking of recent events, I guess Ringworld is exactly the sort of book that Sad/Rabid Puppies feel should be winning Hugos in 2015. Personally, I'm a little disappointed that it won one as late as 1970. Flat characterisation, casual misogyny, and, to make things worse, a single-gimmick world, with a gimmick that is given away in the title and never really used to deliver the wonderment I would hope for in a book about a mission to explore a world.

On the bright side, some of the thought experiments as to what a ringworld would be like are plausible enough.

You're not selling this book to me. In fact, reading your review, I think I'm rather relieved I never found a copy in the end! Interesting description of he Kzin though. They sound similar to the Khaljiit in Skyrim, whom I'd always previously presumed to be a Euro spin on Nekos.

Interesting how different our reactions were! You're making me question my rating...