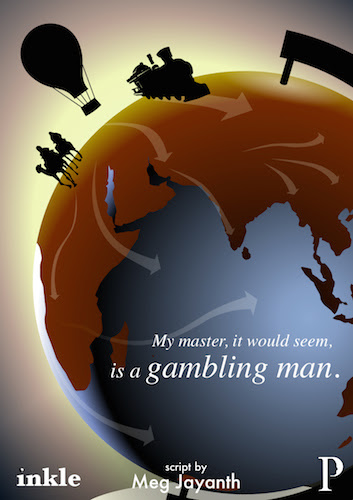 Back in October, I read Strange Charm's review of 80 Days. The review made me buy the game immediately: it sounded like something quite special. And it is.

80 Days is not like most games I have played. It's basically a choose-your-own-adventure story, based primarily on text. The player is Passepartout, valet to Phileas Fogg, travelling around the world for a wager. In every city, you get to choose how and where to travel next, from the connections that are available and which you have been able to discover. (You may not discover every route out of a city)

During every movement from city to city, you choose what to do - look after Fogg (which boosts his health), talk to someone (to find out more about your destination and onwards travelling options), or read the newspaper (to find out about things going on in the world, and sometimes, travel options). In most cities, you can go to a market to buy and sell goods, to a bank to take out loans (which slow you down because you have to wait some day(s) before the funds are cleared), explore to find out onward travel routes and stay overnight. Sometimes, you don't have enough money to continue your journey and you have to find ways to earn it. Other times, Fogg may not have enough health to withstand a particularly arduous route, and you have to let him recuperate. On top of all this, there are a multitude of encounters, on transport and in cities, and adventures and sub plots that you may get embroiled in. 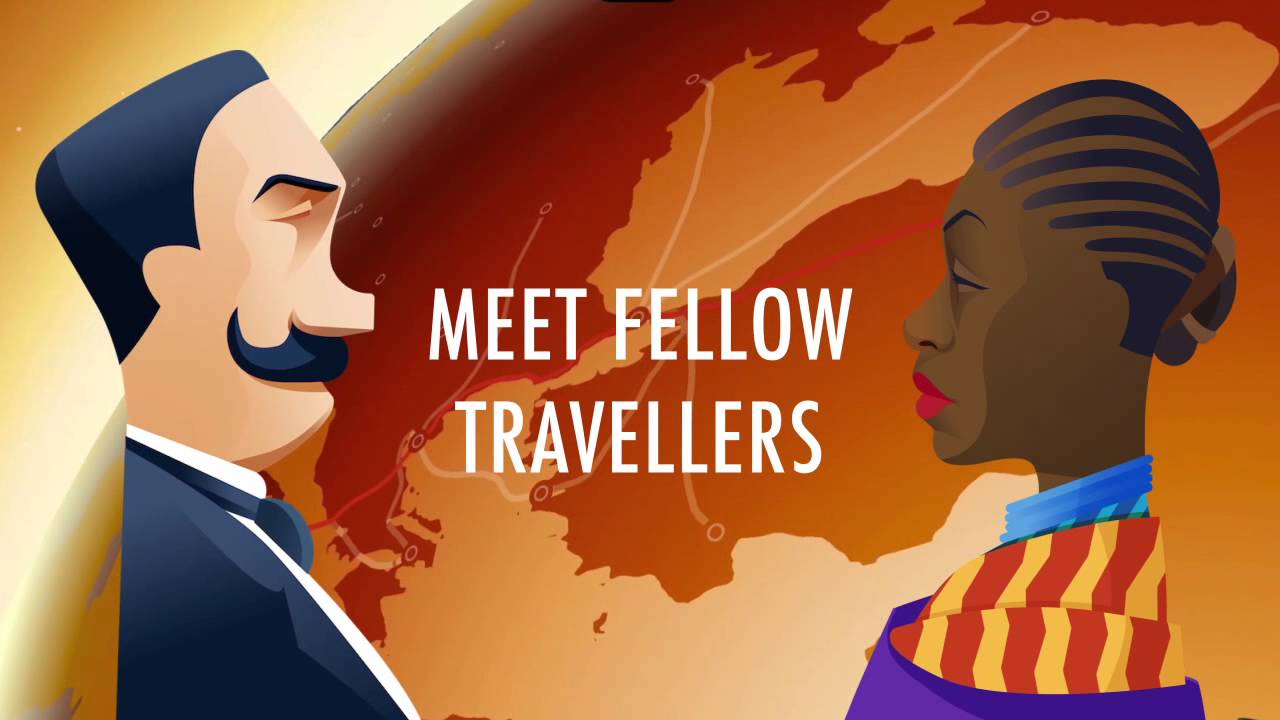 This makes it sound a little dry. It isn't. The characters you meet are a cornucopia of interesting people, of all races, backgrounds, sexes, occupations and opinions. You may meet pirates and royalty, engineers and slave traders, revolutionaries and soldiers. You may get embroiled with a notorious cat burglar or a quest for a robot soul. And the means of transport themselves are fantastically imaginative: this is a steampunk universe realised to its full potential, letting you travel by land, sea, air and, in some places, by even more esoteric means. Not to  mention all the little adventures en route: from murder mysteries to grand adventures in the best tradition of Jules Verne and 19th century explorers, this world is chock full of possibilities.

The first time I played the game, I was focused entirely on getting around the world as quickly as possible, so I picked very long, expensive journey legs. I soon ran out of money and ultimately failed to meet the 80 days deadline. The next few times, I played with more focus on balancing income (through trading profitably) with movement. It got fairly easy to get around the world within 80 Days. Then I started geting more and more interested in exploring the world that the creators have produced, and the sub plots. I'm still playing, after dozens of journeys, because I am trying to resolve different mysteries. In all the many, many times I've gone around the world, I have so far only found one way to find a different ending to the game - but that discovery in itself was highly rewarding. I still haven't figured out the Agatha Christie-esque murder mystery on one leg of one itinerary, and I have stumbled across different story paths related to an object you can acquire at a railway station in Western Europe, but I suspect there is a more exciting possible outcome somewhere, if only I could find it.

The plotlines you might stumble into have very different possible outcomes, both in what happens and what it says about the world. You may come into possession of things that some consider the ultimate abomination, while others venerate them, and depending on what you do with them, you may get lots of money or change the world...

At the same time, I'd lie if I didn't admit that some things are a little bit frustrating. As you travel, most circumnavigations will go without really connecting to most of the characters you meet. You may meet two dozen larger-than-life characters and glimpse their lives for the brief duration of the shared journey from A to B, and then never see them again. Sometimes you glimpse something in passing which hints at an intersection with another plotline, had you only chosen differently. Sometimes you read newspaper headlines that tell you about things you have passed. Then again, that is more or less what travelling is like, no?

It is those frustrations which make the game so addictive: I replay again and again because I want to know what I've missed, what I have passed by. When going around the world again and again, I start getting off at different stops, taking different branches, trying to find different routes. This can be hugely rewarding: having passed through an area and witnessed brutality in one journey, I came through the same town on a different route and got a chance to take part in a daring rescue. Another time, in a different place, I had to choose whether to help robbers or fight them, and the two outcomes were vastly different.

I absolutely adore this game. I can't praise it highly enough. Who'd have thought that a text adventure (accompanied by admittedly very nifty, pretty illustrations and a lovely globe) could be so addictive in the age of smartphones?