More Than Human by Theodore Sturgeon 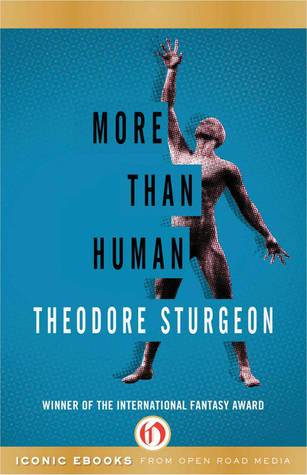 More Than Human is the May read for my Cardiff-based book club. It's a classic of science fiction, award-winning in its time and considered very influential.

The premise of the book is focused on a group of people with unique qualities, who, together, become more than the combination of their parts. A hive mind, so to speak. In the book, they call it Gestalt.

That summary might be a strong hint that this is a book about a concept and an idea. It's much less interested in characters or people as individuals. The start of the novel is in fact very offputting - I'm pretty sure I would not have persevered with it if it wasn't for the book club. There's something quite icky about having one character consistently referred to as "The Idiot", and something very, very icky about the religious nutjob father in his secluded bit of the woods with his two daughters...

If you get beyond the skin-curdling beginning, the book has three parts. Part one - a group of children and an idiot accumulate together and form a family unit of sorts. Part two - a youngster with selective amnesia sees a psychiatrist to understand what he has become. Part three - a middle-aged man with amnesia and an obsessive nature talks with a young woman to understand what happened to him.

The plot device used in the last two thirds of the book - of having a damaged, traumatised amnesiac slowly peel away the layers of memories to gain an understanding of their past and present - is a bit lame. It's even more lame that the same device is used twice in a row (for different characters).

Icky storytelling, a somewhat misanthropic attitude towards its characters, a complete inability by the author to write convincing children characters, lame storytelling devices - I did not enjoy anything about this book. In the end, it is a book which lives and dies by its idea, that humans, as a hive, might be (or become) part of some collective organism. It's an influential idea, and it must have been pretty impressively original at the time when the novel was written, for it to become an award-winning classic. That said, I can't recommend it to modern readers.