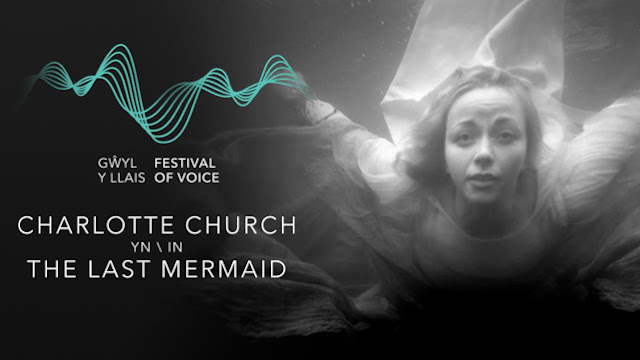 The Last Mermaid is a new production commissioned by the Festival of Voice - a Welsh cultural festival. I'd seen the posters for it, noticed it being tweeted about (I follow Charlotte Church on Twitter because of her political activism), but only made up my mind to go and see it after reading a lacklustre review in Walesonline. This might seem perverse, but the review actually made me very intrigued about the show. Normally, any production with a famous person staged in the WMC for a Welsh festival would automatically get 5 stars in Welsh media, and the review praised the production values, choreography, staging, voice / singing... It's the story Walesonline chose to be scathing about, as "No words are spoken for 30 minutes, and it’s not easy to decipher exactly what is happening pushing the audience’s powers of interpretive detective work to the limit."

So, armed with that review and a determination to be a better story detective than the Walesonline reviewer, I was eager to give The Last Mermaid a try.

First things first: I strongly recommend buying the booklet that accompanies The Last Mermaid. As is often the case with opera (or opera-like) productions, the booklet isn't a list of the cast, but a synopsis of the story, a written overture, if you like. In The Last Mermaid's case, this is done in a semi-poetic way, rather than as a simple summary, but even so, if you read the booklet, you'll get the story easily. However, you might want to buy it about half an hour to an hour before the production starts: due to its style, it is a much longer read than usual. The poeticness was not to my personal taste, but the book serves its purpose very well. 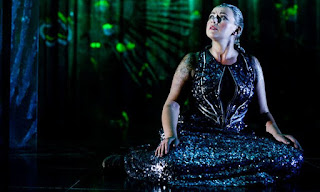 The production itself starts in the sea, where merfolk exist in peace and fearlessness. However, a cataclysm eradicates them (the book indicates an oil spill, but in the staging, this was not obvious: they just seemed to have passed away in their sleep). After the sea has mostly died, the Mermaid hatches from her egg / clamshell, born into a lonely world full of floating plastic. She keens for others like her (a sweet and heartbreaking "Nnng, Nnnng" sound) and explores her world with a newborn's fascination. When a whale finds her, he is overjoyed and deeply saddened - she is the last of her kind; he is the last of his, and to free her from the loneliness she is fated to suffer, he turns her into a human, to the chagrin of the (not entirely gentle) waves.

The Last Mermaid is not a straightforward narrative. It is surreal, full of symbolism, and a distinct artistic streak. There is singing throughout (the first word might be spoken about half an hour in, but there are plenty words sung before then!), accompanied by masterful choreography and beautifully visual, hypnotic staging. It's more operatic in its influences - and modern opera at that. The music is never boring, but neither does it move into catchy pop tunes or stand-out arias. Accompanied by electronic backdrop that wouldn't be out of place in a Gorillaz or Moby album, the musical aspect of the production is intriguing. 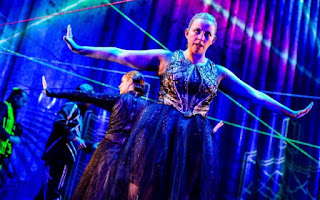 As a grown-up, however, I enjoyed myself immensely. I did wish that the songs were a little more catchy, with more pronounced refrains, but that's because I have a corny taste in music. I did wish that the lyrics (and booklet) had been smoothed out a bit - they didn't roll of the tongue or flow as they should have done. And I did wish that the smell of brand new plastic/rubber stage props had been avoided, and replaced with a smell of the ocean. But compared to the visual extravaganza, the energy on stage, the sheer variety of dazzle, and the richness of the atmosphere that was being evoked, these are fairly minor points.

It's not a simple fairy tale, it's not for everyone, and I would only recommend it to families / children with a taste for high arts, patience, and an appreciation of opera. That said, if you can appreciate art for art's sake, and if you want to see something visually stunning, musically intriguing and hugely energetic; most of all, if you can enjoy having a story evoked rather than told, then The Last Mermaid is perfect.