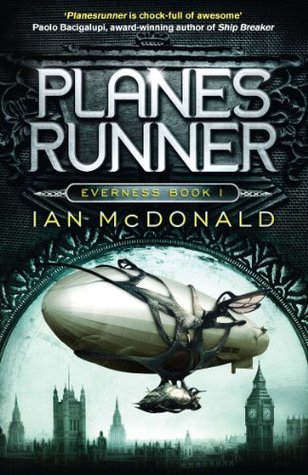 Planesrunner starts when Everett Singh, a London teenager from a Punjabi-immigrant family, waits for his father to join him at a museum. In front of his eyes, his father is abducted. Of course, Everett calls the police, but they are strangely unconvinced by his story, and even the evidence he collected (camera phone photos of the limousine carrying his dad away) seems altered when it is returned. The plot thickens when Everett receives a dropbox file about his father's research...

Planesrunner is a story of parallel universes, and Everett's dad, a quantum physicist working at London Imperial College, was heavily involved in researching these. Soon, Everett goes on a quest to rescue his dad, using just an iPad with an installation of the Infundibulum - the key to the multiverse - to help him on his journey.

The story is engaging from the start but it really hooks its claws into the reader when we meet Sen, a girl who lives and works on an airship in a parallel London. Everett is on a quest, but Sen introduces him to her swashbuckling world filled with its larger-than-life crew, and turns his quest into a joyful, relentless, occasionally piratical adventure. (I'm sure I wasn't the only reader who found the Everness a bit reminiscent of the Firefly...)

Highly recommended: a novel which is smart and superb fun.


Ramblings: the perils of YA


Planesrunner is the first novel in a YA trilogy by Ian McDonald, a highly acclaimed author of science fiction for adults. To call Ian McDonald 'highly acclaimed' is, in fact, an understatement - he's a maestro of the genre and of literature. He's one of those rare writers whose prose is musical without ever risking being corny. Prose which is complex and breathlesss at the same time, authentic to his settings and filled with imagination. He's a real virtuoso of language, like China Mieville, but less at risk of seeming pretentious. (Mieville's prose can be a love-it-or-hate-it thing...)

So I was a little doubtful about trying Planesrunner. After all, when China Mieville decided to delve into the YA market, his attempts to make his writing style more accessible resulted in adverb-laden, unreadably bad Un Lun Dun.

I needn't have worried. In Planesrunner, Ian McDonald managed to make his prose more accessible without butchering his style. In fact, though it starts out in a neutral, London voice, the story does move the action into a realm where people speak the sort of lively patois that is both understandable yet pleasingly imaginative and different. Ian McDonald's ear for language is second to none. However, this same patois means that Planesrunner is not quite as accessible as Harry Potter or Hunger Games - it is unashamedly a novel for readers who are willing to keep their brains switched on while reading.

I recently heard an editor remark that the entire publishing industry had convinced itself that YA was a huge growth market, only to find that actually, it isn't - several established authors and publishers have made forays into YA only to achieve floundering sales. I suspect that the Everness trilogy may be one such effort - the number of reviews and ratings on Goodreads is well below what I would expect for a recent Ian McDonald novel. In terms of quality, I cannot fault the novel at all. If I had to guess a reason, I would wager that having a male protagonist is a bad place to start from, as much of the YA boom seems to be driven by female readers...

Huh. I'd seen the reviews for this, and wasn't sure if it'd be my thing, but you make it sound like it's worth a try.