Review: Children of Blood and Bone by Tomi Adeyemi 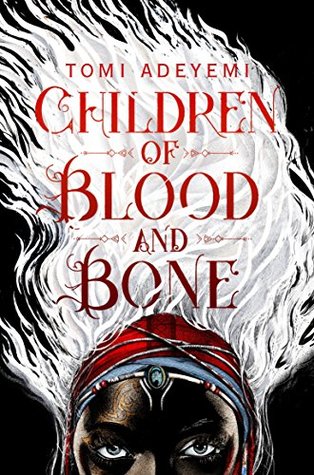 Children of Blood and Bone is a book with one of those striking, stunning covers which makes it hard to look away (let alone ignore). Even so, the text on the back cover made me think twice before buying it:

"(...) Under the orders of a ruthless king, maji were targeted and killed, leaving Zélie without a mother and her people without hope. Now Zélie has one chance to bring back magic and strike against the monarchy. (...)"

This did not sound like a lighthearted magical romp...
...and it isn't.
(Yup, that's my best Top Gear impression up there).

We get to witness the brutal genocide that happened ten years before the story starts. We witness torture, war crimes, slaughter for entertainment, the violent killings of children, persecution of a minority, and brutality of all kinds.

The plot is fairly simple: mysterious artefact can bring back magic. Through luck, it falls into the hands of Zélie and ignites her own magic, so she has to flee her persecutors, round up some other artefacts, and bring them to a certain place by a certain time to do a big ritual summoning of magical powers for her entire kingdom. Basically, it's a quest and a chase and there is a little relay shuffle of alliances and artefacts. That is actually a setup that lends itself well to swashbuckling adventures... except, Children of Blood and Bone is so very, very serious. Too serious to buckle any swashes.

Aside from the basic plot, the story is one defined by trauma and violence. The four viewpoint characters, all youngsters, are:

Zélie - a girl who is a trained fighter and also a diviner - a descendant of the maji who had magical powers before their powers were mysteriously eradicated (which led to all the maji being killed in a genocide). She is traumatised by her past which featured horrendous brutality.

Tzain - her brother, who is a trained fighter, playing some kind of combat sport. He  is traumatised by his past which featured horrendous brutality.

Inan - crown prince and trained fighter / warrior.  He is mildly traumatised by his past which featured horrendous brutality.

Amari - princess, younger sister of Inan, who is not yet much of a fighter at the start of the story, but whose journey is to become... a trained fighter / warrior. She is traumatised by her past which featured horrendous brutality.

Did you notice how often "trained fighter" or "traumatised" and "horrendous brutality" were mentioned above? Yup. Therein lies one of the problems. All our characters are traumatised, victims of violence, fighters, perpetrators of violence. Don't think that means there is a lot of moral relativism going on - there isn't. There is outright evil, and there are those who fight it and who are more or less good, even if they use torture now and again or kill lots of innocent people who happen to be in their way, because the evil they are fighting is just the worst. My issue as a reader isn't one of pacifism (well, not just: the book is so bereft of idealism that I grew quite fatigued with its moral emptiness), it's that there is surprisingly little variety between the characters. Amari stands out for being meek to begin with, but the rest? Their personalities are pretty interchangeable. Amari's story arc is to become just like the others, which is not exactly an improvement, if I'm honest.

I'm going to mention Game of Thrones at this point, because it is the landmark grimdark series that almost everybody is familiar with. GoT does have some variety. Brienne of Tarl, John Snow, Daenerys, Arya Stark, Sansa Stark... all GoT characters may have suffered traumatic events and that trauma has influenced them, but there are still some pretty big personality variations between them. In Children of Blood and Bone, it felt like I was reading one character, four times over, with different attributes in the columns "sex", "magical powers", "wealth and privilege", "prior trauma" and "preferred weapon". They make different choices, based on those attributes and personal experience (only Inan has not suffered a personal loss, only  Zélie has always been visibly a persecuted minority), but their personalities are pretty much the same: "tough fighter with trauma".

So we have a novel of four ass-kicking kids struggling in a mini-war between the downtrodden and their persecutors, with the fate of a kingdom in the balance. The story's tone is pseudo-African, grimdark, possibly just about YA (lots of violence, some sexy stuff but with the story moving on before anything too graphic can occur, etc.), and remarkably joyless. It's that last aspect which I found most difficult.

There are grimdark books which manage to lighten themselves up, by having a smidgen of humour, or some characters which are witty or funny. Children of Blood and Bone is not one of those books. It couldn't raise a smile if it added a gaggle of clowns and a pie fight. (The clowns would accidentally burn themselves  to death and the pies would be full of drugs and poisons and the entire pie fight would be a trap, in this book)

Perhaps the author was aware of this, so in the only attempt to soften the tone I could notice,  there is some teen romance going on. I pretty much hated it, but can't say that this counts much against the book: I am not exactly a fan of vapid, predictable and forced teen romance plotlines in any novel. Other readers might not find the romance in this book predictable, vapid and forced, and for them, it might very well do wonders to make the story more enjoyable.

As you can tell from the review so far, I really did not enjoy the book. The final nail in the coffin is that the story is not terribly internally consistent.  Zélie and Tzain are the poor, downtrodden children of a sick father, living in dire poverty, etc. etc., who happen to have a massive horned beast they can ride on, which can jump over the walls of a city. Wait, what? So, maybe they would hold on to their animal, maybe they would treat it as part of the family even after losing everything, maybe its presence can sort of make sense. But in a world where lots of people ride on giant horned lions and panthers - what sort of city builds walls that any one of those animals can just jump over? How is "my beast of burden arrived" a valid rescue from being surrounded by guards sitting on similar beasts, inside the protective walls? (By the way, I don't recall anyone ever feeding any of these creatures, so how on earth  Zélie's family sourced the meat for a rhino-sized predator while being so poor they could only afford a slice of bread once or twice a week is pretty mysterious). If you accept all the big critters, and the bad city architects, then you are still left with battle scenes that are bereft of simple writery logistics. In one scene,  Zélie has to get from point A to point B, and hurries as if her very life depended on it, seeing en route all kinds of atrocities, even ignoring a small child crying for help  in a burning building (the child burns to death), all so she can get to point B where she really really needs to be. So far so gruesome. But, within one moment of her arrival, she turns around and is found by characters who were with her at point A, who made their way by a different route, and who happened to stumble upon the character she was hoping to find in point B, and who then, with said character, made their way to point B to get  Zélie . Said character is not exactly very mobile, either.  Did  Zélie pick a particularly scenic, roundabout route? WTF? There were one or two other occasions where climactic conflicts occurred, but in ways which made no logistical sense at all, with characters seemingly teleporting from one place they were needed for dramatic reasons to another.

All in all, Children of Blood and Bone was not the right book for me at this time. I could not derive sufficient pleasure from the afro-punk aesthetic, or the romance sub plots, to lift the story above the joyless brutality, the plot holes, the strange predictability, the blandness of the characters. It was a slog to get through - more so than, for example, the later Hunger Games novels. I've read that someone has bought the movie rights, and I can imagine that the aesthetic will be very striking on screen, and that a fast, trimmed down version of this story can work well, but as a novel, I found it bereft of things I could enjoy.