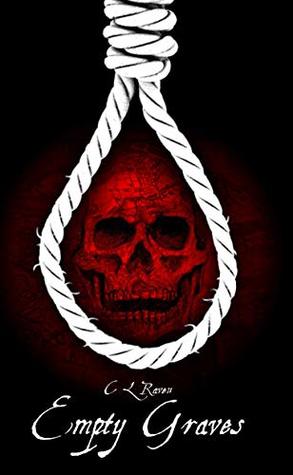 Empty Graves is the latest novel by Cardiff based writers and entertainers CL Raven. I first encountered them at a small horror convention in Cardiff, where a workshop allowed writers to pitch story ideas. CL Raven, identical twins, were very charismatic and memorable, as was their pitch. I have read a few of their short stories since then, and quite enjoyed the comic horror ones.

Empty Graves is the story of Lachlan Ketch, a young man who has just reached adulthood. He is also Edinburgh's latest hangman, somewhat reluctantly continuing the family business. One night, he comes across the Greyfriars Gang of graverobbers, in flagrante delicto. They force him to choose between joining them or becoming a corpse himself. Needless to say, he chooses life, even if it means digging up bodies to sell them to Edinburgh's medical schools for teaching and research purposes.

I was a bit surprised by Empty Graves. I expected to be reading a popcorn entertainment comic horror novel about the dead rising (as zombies) during the time of the graverobbing heyday in Edinburgh - basically, Zombieland meets Burke & Hare. Instead, it turned out to be a historical (romance) novel about a hangman and a bunch of graverobbers, and a forbidden love. There was very little supernatural horror and no zombie uprising at all. Somehow, I must have gotten the wrong idea from the book's description.

That said, the novel was engaging and I enjoyed reading it. CL Raven are writers who enjoy overt drama, a grand canvas, and bold strokes in their writing voice. Some readers might use words like corny or cliché, or moan about "show not tell". Those readers would be missing the point. CL Raven's stories are written with a flair that relishes a dramatic sentence. You can almost hear the movie score going dum-dum-daaaaah!, and the narrative voice could be the frontman in a circus or travelling show enticing you to part with your tuppence and enter the spooky haunted house / ghost train. Is it cheesy? Sure, but so are superhero movies, zombie stories and the London Dungeon tourist attraction...

... which made it a bit surprising that the story is very well researched, authentic, and well grounded in its reality. Historical novels can sometimes be slow moving snoozefests. Empty Graves isn't. It succeeds at bringing a point in time to life, and keeps enough corpses and grotesque incidents and action in the tale to keep the merry mixture bubbling nicely in its cauldron. It's not as filled with humour as some of CL Raven's other writings, which is a pity, but it aims for (and achieves) historical accuracy instead, which is perhaps a bigger challenge than chasing laughs.

However, it's also a book that would have benefited quite a lot from an editor. There are many obvious edits and polishes that would have made the book better. Reading Empty Graves, I kept wanting to get out a marker pen to highlight bits that needed tweaking: in particular, dialogues needed tightening. Sometimes, I lost track of who was saying what. Sometimes, characters didn't have natural conversations, but seemingly delivered exposition or narration at each other in a way that felt nothing like speech. Sometimes, conversations went in circles or echoed previous conversations, leading to a sense of repetition. All of these things would have been easy to fix with a bit of tlc from a good editor, so it's a bit of a shame they weren't tidied up before the book was published.

Nonetheless, Empty Graves is a novel worth trying - if you don't mind a narrative voice that's carnivalesque, and a historical novel spiced with elements of horror.

Rating: 3/5 (a good editor could have lifted this rating by at least half a point).

For an idea of the sort of things CL Raven write, check out this reading: