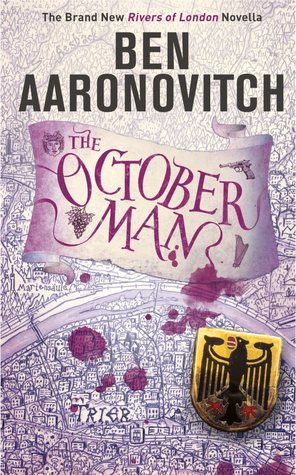 The October Man is a short novel set in Ben Aaronovitch's Rivers of London / Peter Grant contemporary fantasy universe. Only it's not set in London and Peter Grant isn't in it...

When I first heard that Ben Aaronovitch was writing a novel set in Germany, I thought that meant Peter Grant was going on a bigger outing. So far, he's been to London, London, London, rural Hereford and London. I didn't realise it was going to be a spin-off about people who know of Peter Grant (thanks largely to spy agencies), but who have not appeared in any of the previous novels in the series. So I was quite intrigued when, some pages in, I finally realised that this book was going to be something different.

Tobias Winter, our protagonist and first person narrator, is a young German police officer specialising in the supernatural. He is apprenticed to Germany's number one (and only) police wizard. In The October Man, he gets sent to Trier to solve a gruesome murder in the German wine-growing region around the Mosel river, with the help of a local policewoman.

If that premise sounds a little... familiar... then it's because Tobias Winter is the German Peter Grant. The setup of the German magic police might not include a building like the Folly, but apart from that, it feels very, very familiar. There is even an enthusiastic forensic coroner of magic corpses who helps the team, and there are Rivers to talk to...

Tobias Winter also has a very similar narrative voice to Peter Grant. He might not comment about architecture (although he does comment about the history  of places a lot), but apart from that, he has the same sense of humour and wit, the same way of observing things, the same approach to modern policing. His parents might not be into jazz, but Tobias has the same bemused affection for them that Peter has for his...

After the conclusion of the faceless man arc in London, I can see why it must have been tempting for the author to escape to a different angle for a bit. However, it feels a tad disappointing that the different angle turns out to be not that different after all.

The October Man is a curious novel: it's fun and readable and has most of the things you love about the Rivers of London series. Except for the cast. But it has a cast of equivalents instead...

Its biggest advantage turned out not to be the different setting, but the more compact list of characters. Peter Grant's universe has grown to include a big crew of friends, colleagues and recurring characters: at times, Lies Sleeping had felt like an exercise in story logistics akin to pulling the entire Marvel Cinematic Universe together into a tentpole ensemble story. The October Man goes back to basics and echoes Rivers of London more than any other Peter Grant novel since. Its biggest weakness is that it manages to feel weirdly derivative of its own series. It's worth reading and good fun, even so.