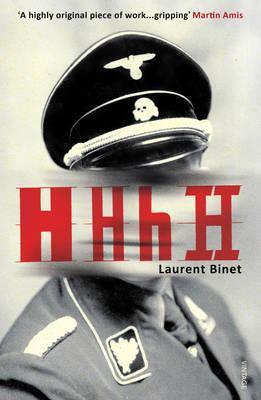 HHhH. At first, I thought I was looking at cyrillic writing, or, perhaps, sanskrit. The same inscription, etched into the pages on the side of the book, adds to the mesmerising effect. A closer look, and I find myself realising that I am seeing Latin script after all - to be more precise, one letter, four times, in four fonts. I am intrigued enough to pick up the book, read the blurbs, read the back, and ultimately, intrigued enough to buy it...

The book, I am told, is a historical novel, about the (attempted) assassination of an important Nazi. It is an almost untold story of derring-do, resistance, and pluck. It is also a novel about the writer, trying to write his historical novel. In short, it is new, fresh, original, different.

Well, I am only partially deceived by this description. It is indeed a (presumably autobiographic) novel about a young Frenchman trying to write a historical novel about an assassination. Except, it is never a novel about the assassination - instead, it is also a novel about Reinhard Heydrich, the Blonde Beast, the Butcher of Prague, competent, cold and ruthless Nazi bureaucrat and leader.

Some assassins do appear - they are mentioned, in passing, in the first few pages, then forgotten until more than a third of the way through, then they disappear again until we are two thirds of the way through, and finally, about three quarters of the way into the novel, they make another appearance.

They are ghosts in this novel, barely there at all.

Well, this writer is obsessed and serious and wants to use only material that he has historic references for. No invention. No improvised line of dialogue. No description that is not taken from eye witnesses or photos or other historical record. No fiction in his history at all. (But even as principled as he is, he cannot keep this up, so he makes up some details, some conversations, here and there... and then, promptly, points them out in the next scene, points an accusatory finger at his own work and declares: this is where I lied, and thus, exonerates himself in his own eyes)

A lot is on the records about Heydrich. But his (wannabe) assassins - well, the Nazis took great care to eradicate anything and everyone to do with their deeds. Little survived. Barely enough for an interesting anecdote at a dinner party. Barely enough to fill a five thousand word novelette. Not even remotely enough for a novella, or a novel...

So the balance, in the historic bits, swings towards Heydrich. Brutal, calculating, almost idol-like Heydrich. Aside from his "Negroid" lips and his "hooked" nose and his "falsetto" voice, this imposing, tall, blonde, efficient bureaucrat is the ultimate Nazi, and our author cannot resist being ultimately "impressed" with Heydrich. Sure, he berates him physically (see the quotes above), spouts fury about his deeds, but, when all is said and done, we are left with the image of a fascinating, dominant man - perhaps the closest embodiment of the sort of Nazi that Christoph Waltz portrayed in Inglourious Basterds that exists in the historic record. Brutal and cruel, yes. Cold and ruthless, yes. Cultured, too: he plays the violin "better than Sherlock Holmes", we are told. And, in his own twisted way, principled: all the underlings he hires are chosen based genuinely on merit, rather than connections and belief in Nazism.

It is hardly intellectually challenging to read. Some sentences are so dripping with the author's judgement, they might just as easily have found themselves in the Daily Mail...

But even Heydrich is not allowed to be the dark (anti)hero of this novel. No, at its heart, this is a novel about writing novels. In a move that Charlie Kaufman might have been impressed by (see Adaptation), it is the author who really takes centre stage - him and his changing girlfriends, who meekly tolerate his historical obsessions and have little other than "passion" and a name each, but no real personalities or influence on his mind.

This author likes to quote other writers - up to seven lines from each, so he does not violate copyright and can claim "fair use" - and (largely) he likes to deride their methods, their clumsy prose, their expositionary dialogue. More rarely, he will offer praise (though usually a backhanded sort of praise). When not comparing his own approach to that of other, more established writers, we sometimes get a fiery rant, about writers or politicians or later, fame seeking murderers. And when not being ranted at, we get scenes bemoaning his challenge, and the importance of getting this right, to pay homage to those nearly forgotten heroes...

This writer is in love with himself and his own voice. But he does not have a high opinion of anyone else.

The book is fast, each chapter / scene merely a snippet, some no longer than three sentences. It is a book of polaroids - no, a book of tumblr entries, just a bit longer than Twictions, but not long enough to lose the reader's attention. Some scenes are entirely in one place and one time, others, barely half a page long, are transitions from present time to history or back again. This is not a novel in any traditional sense, after all. It is a collection of flash fiction. It just so happens that there is some interconnectivity between the pieces.

I did not dislike this book. I often enjoyed it, and breezed through it. But I did not feel as if I got what I had thought I'd bought. This was not a book about resistance and attempted assassination. It was not a novel. It was not historical fiction. Original, fresh, interesting: yes, but not wholesome - it does not make a whole.

In the end, the writer was too in love with himself, and not enough is known about the assassins and their lives and times to fill a novel without creative licence.

The book was not bad.

But neither was it great.