Kingdom of Strangers by Zoë Ferraris

Kingdom of Strangers is the third crime novel in a series set in Jedda, Saudi Arabia. It follows from The Night of the Mi'raj and City of Veils. Some of the characters from the first two novels make appearances, but the novel could probably be read on its own. (That said, the novel is much more enjoyable when you know the history)

By now it is clear who is the undisputed hero of this series: Katia, a female forensic scientist, working for the police, mostly stuck in a lab, but keen to have a more active role in the investigations. (The first novel centred more around Nayir, a Bedouin desert guide who got involved in a murder investigation and met Katia, but by now, Katia is the central pillar of the stories) 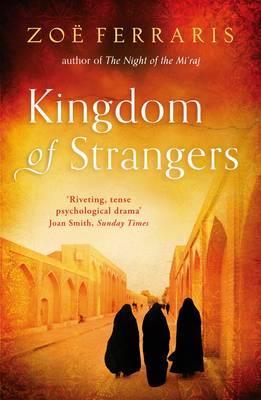 Kingdom of Strangers starts with the gruesome discovery of 19 dead bodies in the desert. A serial killer in Saudi Arabia - almost unheard of. And he's been busy, undiscovered, for ten years...

Meanwhile, the newly arrived inspector Ibrahim, tasked with leading the investigation, is having an affair outside marriage - and, when he turns up at his lover's flat, she is missing.

The novel is quick to set up its main plot strands, but chisels away at them at a pace that is steady, confident and not too rushed. It's not the sort of novel where each chapter ends on a cliffhanger, and each cliffhanger is more unbelievable than the last. Instead, the tension is amped up at a steady, confident pace, and the novel is engrossing all the way through. For a few chapters, I thought it might descend into stereotypes (serial killer toying with his pursuers, making it personal, etc.), but thankfully, the story stops feeling as if it were following a template soon enough.

One of the big attractions of this series has always been that it is set in Saudi Arabia - a country most of its readers might never set foot in (I doubt I ever will), and a country with a culture that is about as far away from Western philosophies as it is possible to get. The book treats its characters with a credible level of complexity, and the reader with a degree of respect. As Westerners, the readers would miss a lot of information if it was not spelled out, and so it is, but never in an obtrusive way. Exposition is handled masterfully. We are simply part to characters' thoughts and analyses - and those thoughts are often determined by the expectations of the society around them, and their own internal conflicts whenever they chafe against the limits (or when they transgress). There is an awful lot of chafing in this novel, but it seems quite credible that regular people in Saudi Arabia have to tightrope walk on a very thin line for much of their lives...

The book is not entirely without flaws. Coincidence, that cheat, does affect the plot, and one revelation is preceded by a cloaked premonition in a dream. Both are forgiveable - the novel would have worked just as well without the latter, and the coincidences are small in number, and occur early in the timeline of the novel.

Of the three Jedda murder novels written by Zoe Ferraris, this has become my favourite. I breezed through it in two days (which is fast, for me), and was completely hooked all the way through. Encountering an actual adulterous character - and his unique crises of conscience, challenges, and the threats hanging over his head - was an incredibly effective source of tension. It made the serial killer mystery pale by comparison, and turned this book into a real thriller.

I enjoyed the story so much, I would recommend the entire series to anyone. I would definitely recommend reading the first two books before tackling Kingdom of Strangers, just so this one can be appreciated fully. The preceding novels are both good books in their own right - but this one is absolutely brilliant.