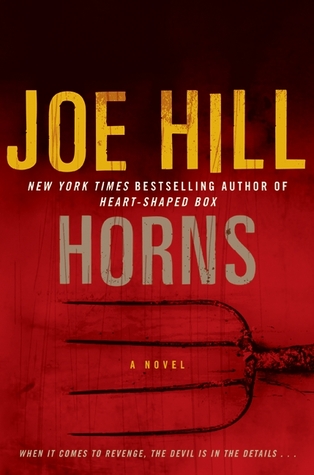 I’ve been noticing movie posters for Horns recently. Daniel Radcliffe with Horns, in posters that look more or less like Twilight-clones. But then the tweets and Facebook posts of publishers and scifi fans & writers seemed to suggest that a) the movie is quite good and b) the book, somewhat different from the movie, might be worth reading.

So I bought it, read it, and… found myself wondering what all the fuss is about.

Horns starts with Ig, the protagonist, waking up after a night of drunkenness. There are horns on his head. Pretty quickly, he learns that other people enter a sort of hypnotic state when they see the horns, and start revealing their guiltiest thoughts to him – which, quite often, are hateful thoughts. Ig, after all, is the only suspect the police ever linked to the rape and murder of his girlfriend, one year ago. There are some other magical powers, too: when Ig touches anyone, he suddenly knows all the darkness within them. Oh, and snakes are rather fond of him now...

I read Horns wondering what contemporary horror novels are like. The answer, apparently, is not particularly scary. The premise is executed well enough, but it reads like a thriller with a strong fantastical element and religious themes. There is a good dose of hatefulness and unpleasantness, but the horns are really just a tool to unravel a murder mystery – and to arm their bearer in the conflict this causes. There is some sense of humour, too, as it's hard to take things entirely seriously once Ig starts carrying around a pitchfork...

It’s not a boring novel. The pace is good in the present but not so much in the lengthy flashbacks: the oh-so-perfect coming-of-age-with-romance Americanah back story is hardly groundbreaking, and the turning-into-a-psycho flashback has little new to offer, either. There is at least one scene along the way that very effectively pulls at reader heart-strings, so the novel packs some emotional punch, too. But it never terrifies or scares the reader - I can honestly say that the end of the first quarter of An Instance of the Fingerpost left me much more horrified and traumatised than anything Horns had to offer. And the latter is a historical novel, rather than horror...

A half-decent read, but I had hoped for something more unsettling.