The Slow Regard of Silent Things by Patrick Rothfuss 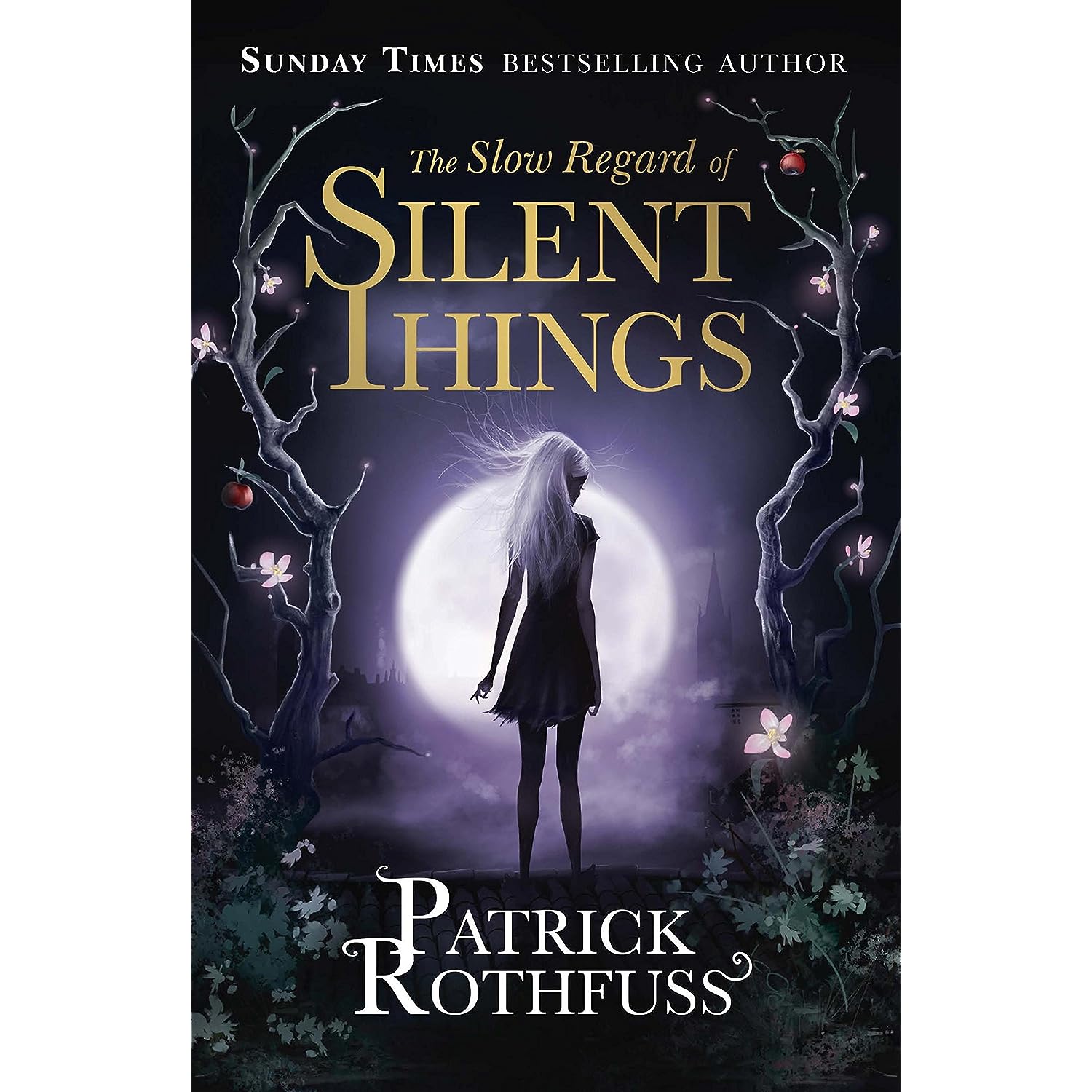 Update: I've posted a somewhat more coherent review on Amazon. The review below gets a bit ranty and spoilery in the second half.

I thought I’d love The Slow Regard of Silent Things. Unfortunately - and to my own surprise - I didn’t. I feel kinda guilty about that. Not least because I dismissed Pat’s warning that “you might not want to buy this book”.

So, before I start reviewing, a strong word of advice: if you are not an existing fan of the Kingkiller Chronicles, don’t buy this. At least, not yet. Go out and buy The Name of the Wind. Right now. It is amazing. Then, read The Wise Man’s Fear, which is pretty good, too. And after that, if you’re addicted to Pat’s amazing way with words, maybe you’ll be the sort of fan to also enjoy The Slow Regard of Silent Things. I was not that fan.

So, Auri. One of the most bewitching and adorable characters of the Kingkiller Chronicles - and perhaps the second craziest (after Master Elodin), this is a girl who lives in the tunnels, crypts and sewers beneath the magical university, an area which she calls The Underthing. She flits in and out of Kvothe’s story with great charisma and greater endearingness. An entire novella about her sounds like it should be AMAZING.

What is clear from Slow Regard of Silent Things is that Pat, like his readers, is in love with Auri. Who wouldn’t be? She’s the ultimate Manic Pixie Dream Girl, only more manic, a huge dollop more pixie, and plenty dreamy, too. It’s also clear that Pat hasn’t lost his knack for beautiful, playful, musical prose-wizardry. Seriously, the man can write and enchant like no other. But, as Pat himself points out in the afterword (full of anxiety and worries), he has not written a story. He has written a 30,000 word vignette. And that takes some adjusting to.

If you think you’d enjoy a 30,000 word vignette with minimal plot about Auri, then you know what? Give it a try. You might (other reviews suggest that most fans of Pat’s work do) love this book. If you can buy it in a way that benefits Pat’s fantastic Worldbuilders efforts, you should.

Now, if, after you have read it, you find yourself wondering why anyone would not like this book, then read on. But be warned. This is the point where the review is going to go off all spoilery and grumpy. And if you happen to be Pat, or a friend of Pat’s, stop reading now: I would never be as unkind in real life as I’m going to get once I start ranting on teh interwebs. And I would never wish you to suffer the unkindness of having your feelings hurt.

Plus, I’m about to get all scatological! Beware!

I didn’t enjoy it, because rather than enhancing Auri, this book somewhat eroded her, for me. There were a number of things which I had mixed feelings about. Top of the list is that it turns out Auri’s manic-pixie-dream-girliness is better deployed as a character cameoing in the Kingkiller Chronicles, and less well served by a full length book. When she appears in Kvothe’s story, you get a strong sense that this is a person, with her own life, and yes, some dose of endearing crazy, but ultimately an independent being. She might be enchanting, but she flits in and out of the books like a hummingbird, shining and magnificent and magical because we know that she lives in her own world.

When the reader is thrown into that world for a longer run, suddenly her adorability starts grating away at the suspension of disbelief, because she seems to see herself in the same adoring tones that the reader sees her in. For me, that is a no-no. It feels inauthentic. All the manic pixie dream girls I've encountered in real life might see the world through spectacles of cutesy, but they don’t see themselves through the same specs - not permanently. They might be able to switch on that perspective, briefly, but they all have a very different perception of themselves most of the time. Others might adore them, but they do not adore themselves. Others might glory in the light of their magical glow, but inside that glow, they tend to not catch their own shining light in the same way.

I’m not saying Auri loves herself in a smug, proud, egocentric way. No, not at all. But when she prances around nekkid and in her altogether for quite a few pages, when the narrative voice constantly highlights her tiny hands and her tiny feet and the way she washes her face, her hands, her feet… well, that isn't a real person's perspective of herself. That is the author playing with a very cute doll living in a very enigmatic dollhouse.

It makes me think that if Auri caught a cold, she'd be making dainty, tingly little sneezes. There would definitely not be any snot anywhere near her tiny little nose. And on the rare occasions when she has to relieve herself, she'd be making the most endearing little pellets of poo, like a rabbit or a deer… good thing she does not catch a cold or have a poo in this novel. (She does eat, two or three time over the course of a week, so she's probably very constipated and only has to leave Auri-droppings somewhere once a week. And yes, I imagine they are an assortment of little round pellets, odourless and dry. She might dive into the sewers, but Auri would never get the sort of tummy bug that results in diarrhoea, oh no….)


The thing I've been trying to express with my scatological diversion is this: Auri does not feel quite real when she's the only thing in a story. She seems more like a gorjuss cartoon character. An endearingly crazy cartoon character, accessing her subconscious consciously, with some obsessiveness but mostly some sort of supernatural wisdom… but not a real woman, or girl. And that bothered me.

The second thing that bothered me is that, rather than setting Auri up as an independent character with a life and purpose of her own, Slow Regard of Silent Things somehow manages to cement the impression that she exists mainly for Kvothe. The entire novella is a countdown of seven days until He will come to see her. It turns out that Kvothe is the epicentre of Auri’s life. Yes, she has various obsessions, and a peculiar way of relating to the world around her (and a quirky way with words), but throughout the text, it’s the anticipated meeting with Kvothe that bubbles to the forefront of her thoughts, again and again. I think He even gets capitalised, as if he were a God. Somehow, I had hoped there would be more to Auri than cutesiness and awaiting Kvothe. Somehow, I had expected her to have a bit more autonomy in her purpose…

And the third thing bothering me was the allusion to rape (or near-rape). Huge spoiler, I know. But you were warned.

If you’ve read other reviews of mine, you’ll know that rape is not a topic I feel comfortable with as a reader. When it’s handled in a matter-of-fact way, it startles me. When it intrudes on a story I expect to be wholesome and joyful, it repels me.

Until fairly recently, I would always expect any rape to be the character-destroying and character-shaping thing, for the victim. And this turns out to be the case for Auri - there is a strong hint that a rape or near-rape was the thing that shattered Auri’s mind and made her flee her previous life as a student and take up residence in the tunnels - but now this bothers me even more than rape handled as a matter-of-fact, unpleasant but not life-determining event. Why? Because I hate the idea that rape turns sane women into adorable manic pixie dream girls. (If it did, should someone go out and rape all the ladies to make them more adorably quirky? If we like pretty broken things so much, do we really condemn the breaking of pretty things, or do we see it as par for the course?)

Okay, those last few sentences were pretentious and very very unfair. Really, it’s the rape-in-a-story-that-was-supposed-to-be-comforting-and-wholesome thing all over again. Writers: do not put the raping in my light entertainment!

So, three things that bothered me, and a text that feels more like Pat wrote a fanfiction to his own novels rather than a story with its own two legs: you would be forgiven for thinking that I hated this book. I did not. I adored the prose. At times, I delighted in spending time with a delightful character. But in the end, the things that did not work, or that left a wrong aftertaste in my story-eating-mouth, outweighed the joys of the prose. So, if you know me in real life and wonder whether this book is likely to be under the Christmas tree for you, the answer is sadly no.