I've been handed the keys to the city Twitter account this week. One of the things I decided early on that I should do is use this power for good - in particular, for supporting the Boycott, Divestments and Sanctions campaign (BDS) which aims to apply pressure on Israel to treat Palestinians fairly, and the Palestine Solidarity Campaign. Both of these are very important to me (and, I believe, to general principles of justice)

This blog post is going to be a bit of an essay, and it might just be slightly controversial.

Why the World Needs to do Something about Israel

Israel's government is essentially an extremist right wing one, imposing an Apartheid regime that is based on religion and ethnicity. The Gaza Strip has been turned into a concentration camp. If that is not enough, every two years or so, Israel carries out military operations that can only be described as mass murder.

Unless something is done, every indication is that Israel is gearing up to commit genocide.

The word genocide is thrown around a lot these days. It's become a rhetoric device, a dramatic turn of phrase used to describe anything from injustice and cultural repression to the Holocaust.

So let me be clear what I mean when I use the phrase: the intentional eradication of a people - in this case, Palestinians.

So far, this has not happened yet. There have been wars and war crimes, there is continual oppression and there have certainly been crimes against humanity, but there has not (yet) been a genocide. After all, there are still Palestinians in the West Bank and in Gaza.

The evidence, however, is that a genocide is being brewed. Just look at what the politicians who currently make up the Israeli cabinet say and believe:

How the Genocide Will Happen

For Gaza, it's easy to see. The Blockade / Siege of Gaza started out by calculating how many calories Gazans would need, and then letting in less than that (about 2/3 of the required amount) in order to inflict non-lethal suffering and weaken people. This policy is no longer current - but it shows the mindset that still very much is.


Now, it's utilities and essentials - electricity, sewage treatement and drinking water - which are largely unavailable. Electricity is available for only a few hours a day. Sewage is largely pumped untreated into the Mediterranean, and drinking water supplies are in crisis. The UN predicts that, five years from now, the Gaza strip will be uninhabitable as a result. Hospitals lack supplies and struggle with the electricity problem: healthcare is in crisis, too.

So, Gaza's genocide will not take the form of gas chambers and mass executions. Gaza will die of cholera, typhoid and disease, of water contamination. It will die of an artificially created, intentional humanitarian catastrophe, inflicted on Gaza by Israeli policies.

As for the West Bank - chances are, Palestinian areas there will eventually experience the same fate as Gaza.
These are not just rebellious backbenchers, or thugs celebrating the killing of children in Gaza - they are now members of the government. (In some cases, their quotes predate their cabinet membership). Some talk of giving Palestinians Israeli statehood on conditions that they know won't be met - thereby rendering them stateless. Others openly talk of Arabs and Palestinians as the enemy, who should be destroyed, women, children and elderly people alike.

The language has become utterly dehumanising. Palestinians are described as 'snakes' by some (Avelet Shaked), and Gaza is universally referred to as 'Hamastan' - a Bantustan for Hamas (even by Netanyaho himself). Some propose to move any undesirable Palestinian forcibly to Gaza, showing that the Gaza strip is seen as a camp for concentrating the enemies of Israel.

These conditions are almost identical to Germany in the 1930s. Apartheid segregation, forced ghettoisation, and contempt for a group of people based on their birth / faith. Dehumanisation and violence. Talk of evicting the group of people they don't want - and encouraging emigration - is rampant. (And, just like in the 1930s, it's not as if any other country has open doors...).

What has it got to do with us (UK/Europe)?

Let's ignore historic responsibility for the moment (I'll go into that later). Let's just focus on the here and now:

Why should we care about what happens in Israel/Palestine?

The answer is simple: our governments are complicit.


In short, unless we as citizens put pressure on our lawmakers and leaders to change their policies, some of the blood being shed is on our hands.

What Can We Do?

Campaigning against Israeli policies is not antisemitism

"Boycott, Divestment and Sanctions is not antisemitism. Do business with Jews, organize with them, love them. But don’t support – militarily, economically or politically – the machinery of an apartheid-state. We can’t do business as normal because conditions in the Holy Land are totally abnormal.

Please tell your government that mere words of concern are insufficient. They don’t change anything. The appropriate response when confronting injustice is to take real steps to confront and eradicate it.
The late Richard von Weizsäcker, former President of Germany and President of the Kirchentag, demanded just this in a letter to the EU signed by many European elder statesmen in 2010.

Beware of anti-semitism, and all other forms of racism, but beware also of being cowed into silence by those who seek to stifle criticism of the oppressive politics of Israel by labeling you anti-Semitic."
- Desmond Tutu 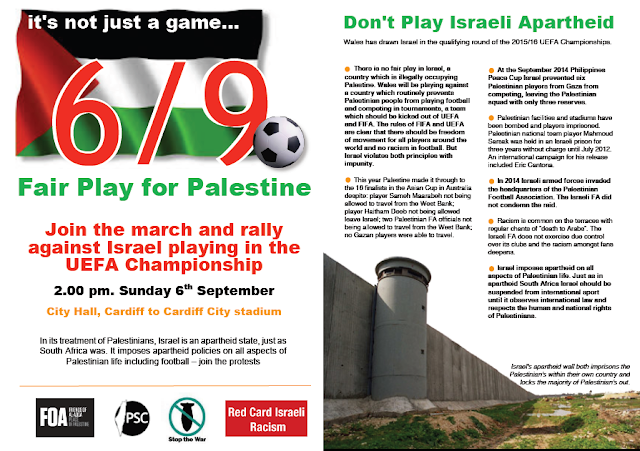 Why should we care about what happens to Hamas? What about ISIS / Iran / Saudi Arabia?

Almost inevitably when anyone campaigns for fair treatment / human rights of Palestinians, someone voices these objections. So, here's my answer:

History: How did we get into this Mess?

In terms of the post-1945 history, this is probably the most unbiased and clear explanation that can be achieved in about five minutes:

If you look back further in history, Britain has a lot to answer for.

This is my blog, so I will moderate comments as I see fit.