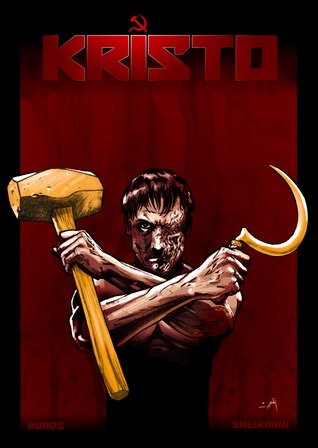 Kristo is a beautifully illustrated, dark graphic novel, retelling the tale of the Count of Monte Cristo and setting it in Soviet Russia.

With a fairly simple premise - what if the father of Aleksandr Solzhenitsyn, a real historical figure, had not died in a hunting accident. What if, instead, he had been locked away all that time, like the Count of Monte Cristo? And what if, at one point, he got out...

With its evocative cover, good use of rhetoric / memorable voice, and its powerful artwork, this is a graphic novel firmly aimed at a grown up market. It does not shy away from violence, but doesn't glorify gore, either.

The story felt surprisingly short. Perhaps that is in the nature of the medium - you can breeze through in half an hour or less. One thing I would have liked a little more of is a reason for our protagonist's sister's actions - I could understand the motives of the other characters better than hers.

It surprised me that Aleksandr Solzhenitsyn had only a very limited appearance in the story. In many ways, the story would have worked just as well without him: the book assumes that the reader either knows about him already, or looks him up separately.

The best compliment I can give this graphic novel is that I really, really wished there was more of it. I could easily have enjoyed it at two, three or four times its length.