My Own Dear Brother by Holly Müller 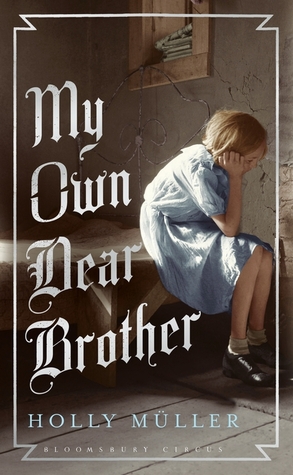 Disclaimer: I don't usually specifically mention if I got a book via Netgalley, but in this case I didn't just get a freebie review copy, but I also know the author. Holly Müller is a writer of Austrian descent, but she was born and raised in Wales.  She studied on the same writing course as I, and I occasionally run into her in work. So: I got it via netgalley and the author is an acquaintance, but the review is nonetheless an honest one.

My Own Dear Brother is the story of Ursula Hildesheim, her brother Anton Hildesheim and Schosi Hillier, three youngsters in Nazi-ruled alpine Austria. The Second World War is heading for a conclusion, and in people's minds the oppressiveness of fascism is joined by the fear of the approaching Russian juggernaut. Basically, times are bad, and looking as if they might get worse.

Ursula, however, has more immediate concerns at the start of the novel. Growing up is a struggle, and life in a small, conservative rural community has its challenges. Then there is her brother Toni, whom she worships, but who has an unsettling fierceness about him. All too quick to hate, all too quick to lash out, her love for Toni can be quite isolating, as he viciously persecutes any friends she makes.

My Own Dear Brother is a very authentic story. This makes it a quite harrowing reading experience. Life in a small, very Catholic community is not easy at the best of times - and WW2 is not at all the best of times.

Everyone has their noses in everyone else's business. Pettiness and judgmental, malicious gossip are everywhere. People are oh-so-keen to have someone to ostracise or look down on. Deeply Catholic, rural areas are, on the whole, godawful places to live. Especially for anyone who is a bit of an outsider.

Ursula's family are outsiders. They are poor. The children run around barefoot until temperatures necessitate winter footwear. They wear patched-up hand-me-downs, their home is not spotless and neat but mildewy and worn, and they live in a farm cottage, outside of the main village.

When her mother starts receiving a regular visitor from Vienna, Ursula's family life to slowly derail. Anton hates the newcomer and town busybodies start to gossip, sniffing scandal in the air. The Hildesheims are shunned and publicly shamed, which proud and furious Anton cannot stomach at all.

Life under fascism is hard to imagine for people who never experienced anything like it. In this novel, the atmosphere is captured vividly. The way gossip and petty resentments can turn deadly, the way certain people gain a mantle of fear, the way people hush their voices and dare not talk of certain things, the way the unspoken gains power over everyone, the way everyone quietly ignores the unspeakable. And yet, the everyday continues. People go to work. People find ways to put food on the dinner table. People see even the most loathsome of their neighbours on an everyday basis, whether at church or at the grocer's. Anyone wondering what life in any authoritarian, ultra-conservative parts of the world is like right now could probably read My Own Dear Brother and get a good inkling.

The novel puts you right into that world, and it's a terrifying, dangerous and grim place to be. Take a young teenage girl who isn't quite aware of how dangerous her world really is, add a disturbed older brother to the mix, and put them at odds, and you get a book that is so much more than you might expect from the cover and the description.

At times, the novel is as tense and suspenseful as the most relentless of thrillers. At other times, the book is a microcosmic coming of age story, and the story of a teenager who feels like an outsider and struggles with self-loathing. Nazi rule is sometimes a backdrop, sometimes a very imminent danger.

My Own Dear Brother is a rich novel, handling difficult topics and weaving together different threads with masterful aplomb. There are a few scenes, a few half sentences, which in my opinion did not really fit properly, but it's quite possible these will be gone by the time it hits the bookshops. (The netgalley version I read was an uncorrected proof, so subject to copyedits)

Fascism, messed up relations, and puberty... they are all psychologically scarring in their different ways. This is a book that combines all three. It features psychological damage and horrors, with sections of page-turning tension, sections of trauma and sections of heartbreak. This is not a feel-good novel, and there is little relief from the darkness of its time and subject matter. As such, it is utterly authentic and utterly gruelling to read. I would say it's a great literary achievement, and a perspective on WW2 that I have not seen before. I would not, however, recommend it to readers looking for a feelgood novel.


My Own Dear Brother vs The Book Thief

Inevitably, people will compare My Own Dear Brother with megabestseller The Book Thief. Both books are set in rural villages in WW2 era Nazi-land, both are about young girls on the cusp of growing into young women.

However, My Own Dear Brother is very different from The Book Thief.

If you buy this book expecting a Book Thief-like story, you will not have a very good time with it. It's not a comparison that will do either book any favours: The Book Thief is a feel-good WW2 story, which views rural Bavaria as a quaint, rough but wholesome world, where the children get their watschen and most people are, at heart, decent, even if they are quite generous with the wallopings they dish out to their kids and quite willing to look the other way when reality is unpalatable. It's a picturesque perspective, applying a golden sheen of quaint nostalgia and jolly affection to a people and an era. Very cute, a bit twee, and utterly alien to me. I grew up in Bavaria and barely recognised it. The Book Thief shows Bavarians in the same way as mainstream media often show Africa:

If the Book Thief had an African character...

(It's not an evil thing to look at Bavaria that way, and I'm sure the tourism office appreciates it. It's just not the Bavaria I know.)

My Own Dear Brother delves deeper, at the cost of being a harder novel to enjoy. There is tension and suspense and drama, but there is no comedy, no humour, and a distinct lack of joyfulness. It's an accurate depiction of life as it would have been. Victories for decency and humane-ness are few and far between. The world of this book is one where good deeds are hard work, risky and can have a high cost, while small mistakes and childish misjudgments can have far-reaching, terrible consequences.

The Book Thief had its little bittersweet Standover Man picture book inside. My Own Dear Brother has a different mythical taste - Krampusnacht is a recurring theme, shown not with playful abandon but out-of-control raucousness and overt sadism.

Both are books about people holding on to goodness even in evil times, but one has a romanticised view, while the other is all-too-aware of human flaws and limitations. One book was designed to be inspirational, the other tells of the world as it is. Which book you prefer will depend very much on what you are looking for in a novel.

Email ThisBlogThis!Share to TwitterShare to FacebookShare to Pinterest
Labels: historic