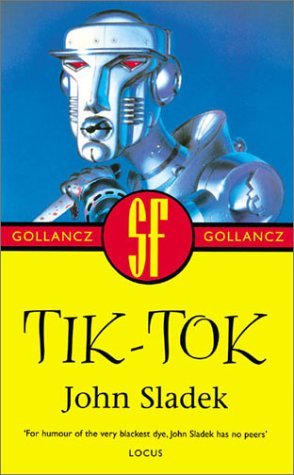 Tik-Tok is a darkly funny satire about a homicidal robot. Originally published in 1983, it's aged surprisingly well. There might not be an internet or social networking websites in the future it envisioned, but when it comes to politics and society, its predictions are all-too accurate.

Tik-Tok's story is told in two strands. One starts with his first homicidal episode, and tells the story of how he moves away from being enslaved, towards independence and ultimately megalomania. The other strand starts with his creation and tells his back story, the episodes which eventually led him to that moment when his asimov circuits (which are supposed to prevent him from harming humans) finally gave out.

I've always had a weak spot for megalomaniac villains, and Tik-Tok was an instant favourite when I first read the book back in my student days. He's got enough valid grievances against mankind to make him a sympathetic villain / anti-hero, perhaps not unlike the devil in I, Lucifer.

The satire bites, the wit can be acerbic, and the violence is so grotesquely dark that it crosses the line from horrible and gratuitous to funny. If you can stomach the first instance of bloodshed without being utterly repelled, and if you have a dark sense of humour, then you'll probably enjoy the book. (That said, if you are a parent, or if you are particularly partial to defenceless children, this might not be the book for you)

Having grown older and suffered the slow erosion of my sense of humour that comes with an ageing brain, as well as losing some of the possibly slightly immature 'yay evil' attitude to stories which I had in my teenage years, I must confess to finding Tik-Tok a bit less satisfying this time around. I still think it's a great example of dark humour and satire. It's just, perhaps, not as seminal as I thought back in younger days. A classic, yes, but I can see why it's republished in Gollancz secondary back catalogue, rather than the SF Masterworks like.