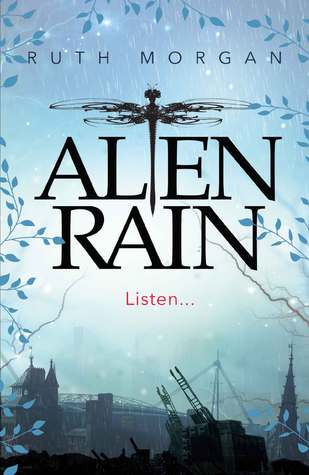 Alien Rain is a Young Adult science fiction novel set in a future where mankind has emigrated to Mars, leaving behind an abandoned Earth and looking to a future of solar and stellar exploration.

It's also set in Cardiff. Two Cardiffs, to be precise: the scaled down replica Cardiff in a dome on Mars and the remnants of our Cardiff on Earth.

Bree, our hero, grows up on Mars. She attends an elite school through a scholarship. To her complete surprise, she is selected to be one of the four teenagers who will accompany a space mission to Earth: the ultimate dream of any kid on Mars. Different domes on Mars have research programmes, which send missions to Earth on a regular basis. Each year a handful of the most promising students from the elite academies accompany those missions. However, Bree has been struggling academically: her grades have been close to flunking out. From the start, she worries about her selection, and what the reasons might be.

Before the mission, there is of course training. It's not just Bree who has doubts about her inclusion: the most academically gifted and competitive member of their little team appears to resent that decision more than anyone. However, as any outburst of arguing would discredit and ostracise them all, so emotions are repressed, hostility stays passive-agressive, and tensions simmer, at least until the they actually get to Earth.

Earth, in the centuries since Mars became mankind's home, has turned feral. A remnant of the last great war, bio-engineered, dragonfly-shaped killing machines, have become omnipresent threats, wreaking havoc on the ecosystem and human visitors. The purpose of Earth missions is partially to find out about the past through archaeological research, but also to find a solution to the problem of the man-made monsters that make Earth uninhabitable.

Alien Rain is a cheerful, brisk-paced romp. There's affection for Cardiff infused in the pages, and special adoration for Cardiff Museum. Bree is a likeable enough heroine, struggling with imposter syndrome and a sense of not fitting in - the latter, perhaps, a universal quality of teen-age. What takes the story beyond your run-of-the-mill YA novel is that it toys with several story directions. It starts out as utopian science fiction, moves through space travel, arrives at postapocalyptic scifi, and then plays with the creepy horror of ghost stories and creature feature tension. Most YA novels are quite singular in their focus. Alien Rain, on the other hand, competently dances around different genres and themes.

Never boring, Alien Rain is fun to read. For any YA fans from Cardiff, it's a must-read. It certainly put Firefly Press on my booky radar!