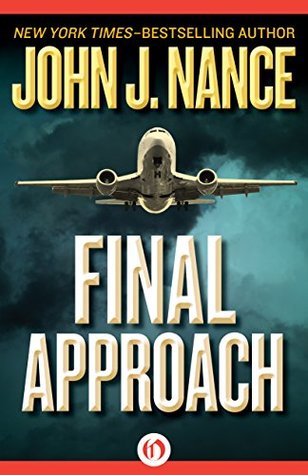 It's been years since I last read a thriller by John J Nance. Specialising on aviation thrillers, this former pilot has written quite a few cockpit-based novels that could serve as wish fulfilment literature for plane spotters and aviation enthusiasts. So, of course, as teenager I devoured them. His biggest success is Pandora's Clock, which even got turned into a TV movie. (The main difference between adaptation and book was that they gender swapped the FBI agents: in the book, the naive rookie was male and the experienced, highly competent agent female)

Final Approach, however, takes us into a slightly different world. This time, it's not about a pilot hijacking his plane or brave pilots with a deadly load in their airliner, nor about landing a passenger jet on an aircraft carrier in a hurricane, nor about a teenaged flight sim fan taking control of a jet when the pilots get incapacitated (told you they are wish fulfilment books for aero-geeks). This time, we're following the investigation into a crash, and our heroes are the Go-Team of the NTSB. Not since Michael Crighton's Airframe have I a read a novel set in this most exciting and unique of professions.

Fortunately, John J Nance doesn't disappoint on this occasion. After taking the action antics and machismo way too far in some of his novels (cough, Blackout, cough), it's a relief to find this one on credible and authentic form. Final Approach was one of his first novels, and as such, turns out to be much more well-grounded than his later efforts. The techy side of things is entirely realistic. OK, so the story throws quite a few red herrings our way, but actually, that isn't unrealistic: every crash is such a rare and unlikely event these days that there is almost always a huge mystery about its cause.

Now, this is a thriller written primarily for boys. As such, the writing is a little by-the-numbers, and every single character gets described in physical detail as soon as they appear on stage. Every heroic male is athletic. Every female is sensual and attractive and lusted over. Characters don't grow or change or any of that mamby-pamby stuff: they walk on, they establish their role in the plot, and they stick to it. Don't expect the human elements of the story to surprise or enchant you: this is a technological thriller for people who are interested in aviation. Human characters exist mainly to be "human factors", not to be people.

That said, if you like techy thrillers and aeroplanes, this book is ace.