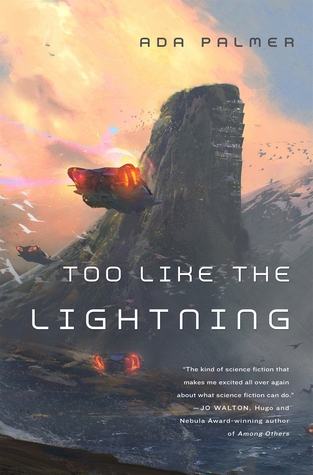 If you follow Jo Walton (multi-award-winning writer and good human being), it's likely that you've noticed her excitement about the forthcoming novel Too Like the Lightning by Ada Palmer, an academic Jo has huge respect for. Her excitement was enough to make me curious. The description of the book convinced me to give it a try.

There are not many people writing utopias these days. We live in a cynical age: it's easier to imagine dystopia after dystopia, and, at any rate, it's easier to write a story about struggling characters if your setting is one of their obstacles. Too Like the Lightning is thus an unusual book: Ada Palmer imagines a future where there haven't been wars for two hundred years, where people, by and large, live content and fulfilling lives. It's not a perfect future: there is crime, there is punishment, there are conflicts and secrets and hierarchies, but it is a credible, largely positive future.

Our narrator is Mycroft Canner, a criminal living out their punishment by serving the most powerful people on the planet. In this future, those criminals who pose no more risk to society are released into servitude: they are not allowed any possessions and they have to dedicate themselves fully to repaying society whatever harm they have done. They are paid in food for their labours. Early on, Mycroft wonders whether their slavery is an example of humane or inhumane punishment.

Mycroft's narration starts as their favourite haunt faces a double crisis. Downstairs, a new sensayer (a non-denominational faith and philosophy adviser) bursts into the biggest secret: Mycroft's ward, twelve year old Bridger, has supernatural powers to bring anything to life. Meanwhile, upstairs, a detective comes in to investigate a mysterious crime which involves this particular household.

Even though a crime mystery and a young-god-among-men story hold the plot together, this is really a book about philosophy and possible future societies. The gradual revelation of how this world functions, how people fit in the mix, how a post-war, post-religion, post-nations, global future for humankind might look, is arguably the most interesting aspect of the book. I'm excited to see Ada Palmer's ideas, as some of my own mullings fit the notions that are being explored in this novel. Bunching people together by temperament and interests rather than familial relationships, banning religions but encouraging (obliging?) individualised moral and analytical thought, discarding geographical nations and using philosophical ones instead: all of those ideas describe a way to deal with a world where technological changes and scientific advances have made current systems (geographically-based nation states and prehistory-based major religions) outdated and dangerous. I could imagine having hours of excited conversations with people about the ideas in this novel

Aside from the speculation about systems and societies, the book also looks at gender and sex with completely different eyes. This is a (prudish?) society where people use neutral pronouns ("they") about everyone, as they feel that alluding to a person's sex infers sexual thought. Mycroft Canner, however, chooses to give their characters gendered pronouns. To make matters more complicated, Mycroft uses pronouns that match the characters' temperaments, rather than their biologies. So we meet women who are called "she" and men who are called "he" as often as we meet men who are called "she" and women who are called "he". This makes for a strange reading experience, even more confusing than reading Ann Leckie's Ancillary Justice. It also suggests that some character traits are inextricably gendered: sensitive, subtle, healing creatures are sexed as female, while brash, blunt and combative ones are sexed as male. Perhaps more surprisingly, it is not just Mycroft who does this, but the characters themselves choose to take on gendered appearances that match those personality traits in certain circumstances. (Most people, in everyday situations, seem to dress in a gender-neutral way.)

As you might guess by my review so far, this is a books full of interesting ideas. It's also a book full of philosophers, who are quoted and whose main ideas are often summarised by Mycroft. With all those ideas jostling for attention, the book doesn't often feel like a mystery.

There are dozens of characters, and to make things even more complicated, many of them have several different names, at least one for each culture. Mycroft, a multi-linguist, speaks almost every language fluently. (When dialogue changes into a different language, this is indicated by the speech marks, which match the conventions used in the other languages - a very clever device). Through Mycroft, we witness some of the scheming and plotting, some of the investigating and detecting, and much of the web of power that runs the world behind the scenes. Even so, there's something vaguely non-human about many of the power players. As the story progresses, their interactions become more and more surreal. By the time we get a dose of de Sade-ist philosophising in a boudoir setting, the book has the ambience of a surreal, feverish, sinister sex dream.

It's a very strange book. Packed with ideas, set in the far future but told in a narrative style that emulates the writings of past centuries (our narrator has entire dialogues with his imagined reader), filled with characters none of whom seem entirely human... the book asks a lot of its readers. It demands intellectual engagement and thought. I imagine it would be three or four times more rewarding if I had better general knowledge, but Ada Palmer gives the reader enough info-dump summaries to be able to engage with the story even if they have never read about philosophy before.

Yet, despite all this, I found it difficult to truly enjoy the book. The feverish ambience towards the end felt clammy in my mind, not something I generally enjoy. However, what really hurt the book more than anything else is that it ends completely unresolved. It is the first of a series - I believe it's the first half of a duology - but even for a book that expects a sequel, I would expect a natural stopping point to arise at its end. Too Like the Lightning does not have a natural stopping point. It ends neither on a cliffhanger nor with a plot resolution of any kind. (Well, arguably the plot was moved to crises points in several of the plotlines, but they did not feel like cliffhangers, because the end of the book leaves the characters not very far from the start of the book, plot-wise.)

As rewarding as the philosophical discourse and the intelligent thoughts and the utopian mullings are, the ending of the book is just as frustrating.

PS: The book reminds me of Ann Leckie's and John M Ford's writing, If you enjoy both (and especially, the latter), then Too Like the Lightning is likely to be a special treat for you.

Hmmm, interesting. I've got this to read too.