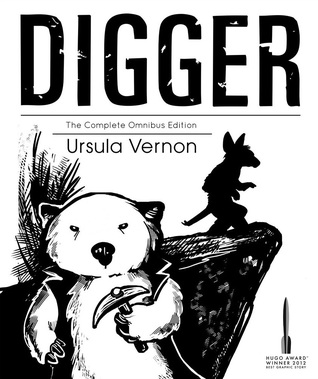 Digger is a graphic novel that started life as a webcomic. Unlike many webcomics, this was not merely a short strip of cartoon humour. Instead, Digger is a long form fantasy epic, told through the medium of a serialised comic strip, almost right from the start. And so Digger - the complete Omnibus Edition is absolutely the best way to read the story.

Digger is a wombat, from a world where wombatkind live in warrens and where wombats are a no-nonsense, practical and deeply unspiritual species, concerned primarily with feats of civil engineering. Or so we are told by Digger herself, whom we meet elsewhere.

When we first meet Digger, she's in the process of accidentally tunnelling into a different world, through sinister, magic-infested caves that induce hallucinations (and which may contain monsters who want to skin her), and out through the floor of a temple dedicated to an elephant God of compassion and peace and stuff. This is a world where no one has ever seen a wombat themselves (though the species is not unheard of, merely semi-mythical and rumoured to be extinct).

Being an atheist in the temple of a God can be a bit awkward. It's even more awkward if the statue of the elephant god in question starts having conversations with you, probing why exactly you breached the temple, through a troublesomely semi-metaphysical hole which doesn't quite seem to be part of the world, and what exactly your intentions are...

What follows is a story that finds its feet by improvising, introducing this strange world and its inhabitants to Digger, before deciding that it was meant to be a tale of epic fantasy all along, and developing a plot to suit. Except, this is an epic fantasy starring a hero who really doesn't like gods, or prophecies, or magic, and who deeply distrusts anyone who foolishly messes around with such unpredictable things.

Digger is a refreshingly different hero. She's tough, a builder (with the mannerisms and working class attitude that entails), and primarily concerned with a desire to return home. She doesn't have an ounce of nambypamby romance in her heart. There's no romantic interest, no desire to start a family or have children, and we even find out that wombat marriages are arranged through medium term contracts, a few years in length. Digger herself is often rude (especially to oracular snails) and generally selfish (quests to save the world from unspeakable evil are only of any interest if they further her goal of returning home)

The humour in Digger ranges between wry wit, subverted expectations and slapstick. However, despite plenty of chuckles, Digger is not a work of comic fiction in my mind. Humour serves and enhances the story from time to time - but the story does not serve the humour.

In her adventures, Digger encounters joy, triumph, heroism, tragedy, innocence, atrocity, wisdom and stupidity. She may have no stomach for spiritualism or romantic notions of heroism and valour, but she always has time for people (no matter what shape, species or gender those people may have). Digger is one of those works which have a certain kindness at their heart. Often in the course of the story, Digger starts out at cross purposes with a character, but eventually grows to know them. Some become friends and allies. Others don't, but are generally understood by Digger (and the reader) to be decent enough people in their own way (or at least, to be following their own moral logic), even if they happen to be trying to do evil things to Digger and her friends.

What really makes Digger work is that it's filled with show-stealing characters. Digger herself is a great centre of gravity for all the others to circle around, but those others are largely outstanding in their own right. There's tragic Ed, a male hyena expelled from his matriarchic tribe, there's the innocent but frighteningly powerful Shadowchild, and there's the very very young Hag, and perhaps most showstealing of them all, there's Sorka the Bridge Troll...

Digger is a wonderful book.

If you took Labyrinth and The Princess Bride and substracted the romance / teen notions of love, but left in everything else magical and wonderful and added a prosaic, impatient wombat civil engineer to the mix, you might - just might - end up with something a little bit like Digger. But you'd have to be a bit of a genius - and Ursula Vernon, it seems, is definitely that.

PS: I am selling my copy (with a heavy heart) as I will be moving house soon. Interested in buying it? Get in touch!

I am very tempted by this one! I've read Ursula Vernon's work as T. Kingfisher, and really enjoyed her style.