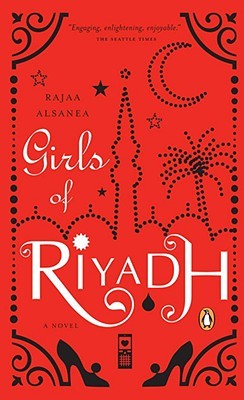 I happened to spot a copy of Girls of Riyadh in Hoffi Coffi, on a booksharing shelf. The title intrigued me, so I downloaded a Kindle copy (the paperback is still on the shelf in Hoffi Coffi if you want it!)

Girls of Riyadh is a novel showing a side of Saudi Arabian life that people like me, a man who has never been there, will be completely unfamiliar with. It has been described as "Sex and the City in Saudi Arabia" which, along with the title and cover, should give you a hint about its topic matter. Saudi chick-lit, written by a Saudi woman writer - who'd have thought?

The book is told in a series of posts. In any other place, they might be blog posts, but here, they are delivered as email messages to a newsgroup. Communication in Saudi Arabia in the early 2000s appears to be about 15 years behind communication in Europe - who still remembers the age of newsgroups? The author of the mailouts is an anonymous young woman, who prefaces each post with a little message to her readers, initially announcing her grand plan to shake things up a bit and later responding to reactions to her messages. Inside this frame (which sounds more complicated than it is), she tells the stories of four young women trying to navigate the tricky arena of dating, sex and marriage in the most sexually repressed country on Earth.

It should be said that the narrator and her friends all belong to the same class - well-off, part of the "in crowd", and with all the privileges of being upper class in a fairly rigid society. Not royalty, but wealthy and urbane. As they are not allowed to drive (the book was written a decade before this week's long-overdue royal decree allowing women to drive cars), they all have chauffeurs at their behests. The chauffeurs are virtually nameless in the book - they are obviously so far beneath our heroines that they need not be acknowledged or considered at all.

Class is important because it's pretty clear that these young women are more privileged than most. The ultra-strict laws might apply, but they never have any real terror of being caught when breaking them, because they know that they'll not get into huge trouble if they do. So, in one of the first scenes, they all decide that they want to have the most unique, trendsetting hen do for the first of them to get married that ever has been arranged in Riyadh. That means hiring a DJ and having a girls' disco and dressing up at home (apparently the standard approach) is out of the question. Instead, they decide to go the shopping mall & about town without being chaperoned by their families. One of them dresses as a boy (so she can pretend to be their younger brother), and with the help of their silent chauffeur, they go out on their adventure.

Of course, the escapades that are possible in Saudi Arabia, even for pampered wealthy girls, are comparatively tame. Exchanging mobile numbers (through car door windows) and texting with boys (or chatting online, or, if really interested, phoning) is about as far as it goes, before engagements & marriage. (The process of getting married in Saudi, meanwhile, is also something I learned a lot about through this book) But, having grown up on teen movies like Clueless, it's equally clear that these girls dream of leading less restricted - though not liberal - lives. They want to be cool, fashionable, flirtatious, desirable, and able to have fun. They yearn for drama (which means they gossip about the smallest details and spend a lot of time being overdramatic), but most of all, they yearn for something their society perpetually withholds: respect and a kind of full adulthood.

Above all else, Girls of Riyadh is a critique of Saudi culture - and Saudi men in particular. No wonder it caused a bit of a stir over there when it was published. The four women go through ups and downs, but again and again they find that the environment they live in is out to judge them, and that men are looking not for women to love, but for women to control. In the book, Saudi men all have very clear expectations of women, but won't communicate those, and then judge women very harshly if they in any way behave differently (not worse, merely differently) compared to those expectations. In short, Saudi Arabia has created a culture where relationships and love have become perverted and corrupted, making it near-impossible for people to find happiness and love, if GoR is an accurate portrayal.

The book has a serious undertone, but is written as chick lit, so it is accessible, tongue in cheek, playful, and generally light entertainment. It doesn't just criticise - it also highlights the humanity and the many ways in which young people navigate around the social minefield they find themselves trapped in.

I'd highly recommend Girls of Riyadh for getting a flavour of an experience that will be quite alien to most readers in the West / Global North. It's also a pleasant book to read.

PS: My only other exposure to Saudi Arabia-set novels is Zoe Ferraris' excellent trilogy of detective novels. Girls of Riyadh complements those novels quite well (or vice versa), as the trilogy is set in Jeddah (apparently a more relaxed city than Riyadh, if GoR is to be believed) but in a lower class (its heroes have proper day jobs, not as luxuries, but because they need to work). In some ways, that means Zoe Ferraris' characters are more restricted (they fear genuine and harsh consequences from the judicial system if caught transgressing in any way), while in others, they are freer (they have smaller networks of family & peers ready to judge and shun them). Zoe Ferraris' novels give a fuller picture of everyday life and its problems, while Girls of Riyadh shows a more privileged perspective by putting a spotlight on Saudi Fairly-High Society. The characters in Girls of Riyadh are more likely to end up as murder victims or perpetrators to be investigated by Zoe Ferraris' characters, while Zoe Ferraris characters would be pretty much invisible to the high flying, occasionally globetrotting Girls of Riyadh...