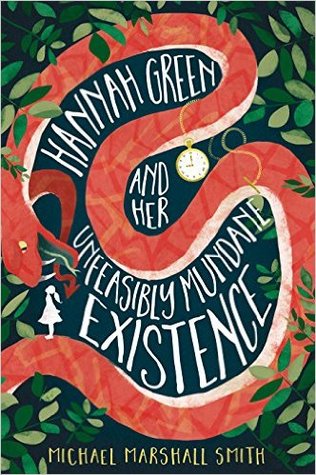 Hannah Green and her Unfeasibly Mundane Existence is a novel about a girl whose parents are separating. It's also a novel about the Devil having a problem, and Hannah's mysterious but kooky grandfather, about adventures with demons and angels and about saving the world.

More importantly, it is a novel by Michael Marshall Smith. MMS is a writer whose career has been a bit non-linear. I first encountered his novels at the age of 17 when I went to University, and I immediately became a fan. Back then, in long-ago 1999, MMS was a writer of uber-cool, edgy, cyberpunk-inspired witty science fiction. His novels One Of Us and Spares have stuck with me for a long time. His short stories, collected in What You Make It, had sharp teeth. Then, in a surprise twist, MMS turned to writing serial killer thrillers as Michael Marshall. These, too, had teeth, and a unique sensibility, combining elements of horror (beyond Silence of the Lambs style violence) and creepy conspiracies into a brew that took serial killer thrillers into surreal and chilling arenas that they had not reached before. More recently, he has returned to writing short novels as MMS, some of which were adapted for TV. Now, Hannah Green - a novel that is, to my genuine surprise, sweet. MMS has never done sweet before, as far as I know.

Hannah Green, with its quirky title and its child hero, seems to take aim at the people who buy books like The Selected Works of T.S. Spivet or Extremely Loud and Incredibly Close or, perhaps, The Hundred-Year-Old Man Who Climbed Out Of A Window and Disappeared. I have read two of these, so I guess I'm one of those people. As writer of considerable talent, MMS adjusts his tone to suit this different genre. Our narration is a bit quirky, a bit sweet, gently bumbling and bemused. There is warmth and wit infused in the telling of the tale. Some readers compare the style to Neil Gaiman's (in Stardust or The Graveyard Book), which is a fair comparison. There are times when it gets a little too sweet, in the way that, for example, the TV show Pushing Daisies tends to overshoot the optimal level of sweetness. On the whole, however, the style is mostly just right.

There are moments, quite a few, when the narration ponders some real stuff. The way the story addresses Hannah's parents' separation, and their feelings, is written with deep insight, rich metaphors, and real heartache. There's a sense of dearly-bought wisdom in those sections, and a depth which took me by surprise. (MMS is a whip-smart writer, a virtuoso with words, but I remember the edgy-angry MMS of 1999. This older but wiser, perhaps kinder version was new to me)

However, it's not all sweetness and wisdom. MMS's version of hell is every bit as disturbing and surreal as one might expect. His devil is dangerous, even if Hannah Green is protected from seeing that side of him. There may not be any explicit sex in the text, but there's real threat and a fair amount of violence. It's certainly not a children's book, even if the main character is a child. Neither is it one of those books where the child in question is a "precocious" "prodigy" type character (which usually means a shrunken adult with some child-superpowers and weird naivetee that adults wish children had). Hannah may be described by a narration that is adult, affectionate, and a bit twee, but she's pretty normal for all that. Any sweetness is in the narration, not in her actions.

Hannah Green is an enjoyable novel. It is sweet and wise and kind, but there are teeth in there, too, and they are sharp and pointy... A real gem and a bit of a surprise.

Hmm. The "bumbling and bemused" narration might've been what made me find this book so uneven, maybe. I'll have to ponder that, because you are right that it's part of the sort of subgenre/audience/can't think of the right word he's aiming at.

Very broadly, the genre would be "bedtime story for adults". Not quite "fairy tale for adults" because it is not quite as archetypal (Stardust and Princess Bride), but "bedtime story" because of the sweetened narrative voice and the warm colours & golden sheen of the perspective. Like the movie Hugo, or Amelie, or TS Spivet, or the above-mentioned books.

I think it's the devil's effect on reality & his casual, cruel killing of dozens of people which unbalance the tone a little. Another writer who does that sort of thing is Dan Rhodes. In fact, come to think of it, Hannah Green feels more like a Dan Rhodes novel than like an MMS one...

On the other hand, it is a book about the devil, and I think it's perfectly OK that he is a real, casually vicious, devil and not the safe trickster devil that inhabits a lot of stories these days.