Review: The Tenth Island: Finding Joy, Beauty, and Unexpected Love in the Azores by Diana Marcum 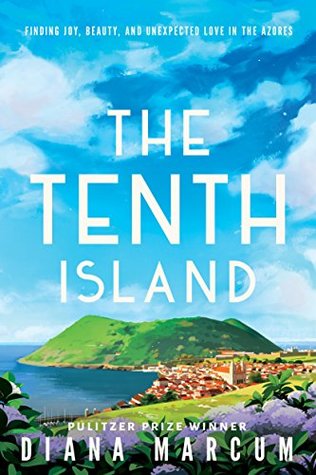 The Tenth Island is a book written by a young(ish) journalist who falls in love with the Azores and decides to stay there for a sabbatical from her unfulfilled, stressed out life.

As a young(ish) writer who has fallen in love with the Azores and who has decided to stay there for a sabbatical from his unfulfilled, stressed out life, I found myself intrigued by the premise, though perhaps somewhat envious of the fact that it resulted in a book about the experience in her case.

After reading it, I can say with confidence that I was not the target audience, regardless of any theoretical similarities in my situation. In fact, I could not help smiling while reading Hannah Green at the same time as this book, because it had a throwaway line about real stories as opposed to those about "needy middle-agers overturning their lives in a fit of First World pique and finding true love running a funky little book shop in Barcelona". Apparently, there is an entire genre for this sort of thing, which I had hitherto been ignorant of. (Side note: I would be delighted to run a bookshop on any Azorean island. Having watched Black Books, I am confident that I am the perfect guy for such a project! Contact me with lots of cash to make this happen!)

So, ignorant of the entire genre, I cannot comment about whether The Tenth Island is as good as Eat Pray Love, the book mentioned a lot in publicity about this one. What I can say is that it is filled with affection for the Azores. It's a bit of a shame that the writer spends her entire time on Terceira, the party island, which is the least scenic of the bigger islands. (Then again, she's mostly interested in the people, not scenery, so it's not the wrong island for her)

The author is a very different person compared to myself. An extrovert, perky, pretty, interested in people, fast at making hundreds of friendly acquaintances, a real social butterfly: she is essentially my polar opposite. Thus the text is a bewildering list of all the people she meets, filled with impressions of their lives and snippets of their life stories. As a journalist, the author talks to people, and asks them questions. What a bizarre thing to do. I barely remember people's names in real life, so I found that, aside from one or two of the people in her book, I had no idea who anyone was most of the time.

The author also had a very different way of looking at the humans: she looks at everyone she meets with affection, but also a strong tendency to cutesify everyone's culture, habits and history (except for Americans, who are the default and whose culture therefore isn't interesting enough to smile about). Her book isn't full of people, it's full of quaint, cute caricatures. Whether Azorean or Armenian or Iranian, she gives everyone just enough colour to draw a cartoon person, an Instagram polaroid snapshot with technicolor filters, but not enough to make anyone come across as a real person with a real life. As such, the character I enjoyed most turned out to be Murphy, her labrador, because at least with a dog it's not so shallow or patronising to feel bemused affection  to the exclusion of any other sentiment.

As for life lessons, the book does occasionally include an aside to the reader with some theory / snippet of wisdom. None of those theories resonated or stuck with me, unfortunately, which left me feeling as if this book was a bit vapid. This was a surprise, as the author is a Pulitzer Prize winning journalist, someone who has done outstanding, world class work. Perhaps she has a better eye for other people's stories than she does for her own. Or perhaps a feel-good book about happy laid back quaint Azorean cartoon people living on their quirky, pretty islands and in their homesick diaspora is simply too light a subject matter to burden with deep insights into greater truths.

In the end, The Tenth Island felt a bit empty. The title promises the finding of things (joy, beauty and unexpected love), but only two out of three are found in the text. In a pleasant surprise, there is no love, or rather, she never actually gets together with the man whom she seems to feel the greatest affection for. Instead, she has a relationship or two with men whom she has no discernible feelings for, although this might also be a factor in the empty feeling the book left behind. Her (multiple) visits to the Azores are basically extended holidays. They do not seem to change her, nor her life. The main gist of the book could be summed up as "woman enjoys taking a break now and again", something which could surely only come as a surprise to Americans with their pitiful holiday allowances. At least she describes the Azores, well, and with affection, and that is good.

So yeah, I was really not the target audience. On the other hand, if the book makes a few more people curious about the Azores, that's a lovely achievement, and it might make for a pleasant, light read for any travellers heading to these islands.