Review: The Girl in the Road by Monica Byrne 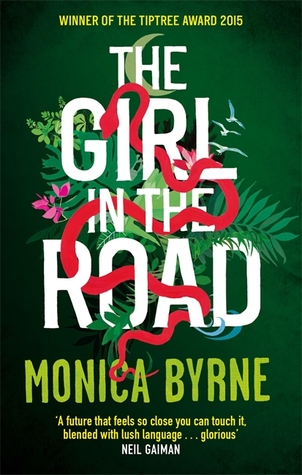 The Girl in the Road is a literary science fiction novel about a young girl and a young woman, journeying towards Ethiopia. The young girl, Mariam, crosses the African continent as a stowaway on a lorry, while the young woman, Meena, crosses the ocean from India, on foot, walking on top of a wave energy generator that connects Djibouti to India. Both are running from personal crises, and neither has any idea what to expect in Ethiopia.

I like reading science fiction set not too far in the future. If it's set outside the standard American / Western Europe setting, that makes it all the more enticing. So I had high hopes for The Girl in the Road, even though it is a book with one of those awful "The Girl..." titles.

Unfortunately, the book turned out not to be enjoyable at all. It starts in a breathless panic, as Meena wakes up with five snake bites in her chest and goes on the run. Fairly quickly, the reader begins to suspect that all is not as it seems, that Meena is hallucinating or mad or both, but for a while, there is a lot of rushing around. Once she's on the trail (the wave power generator), the sense of movement slows as she walks for thousands of miles.

Similarly, Mariam returns from the beach, where she has been given a chunk of sea snake meat, to find a "blue snake" in her mother's shack, so she runs away knowing she can never return. Shocked by the sight of the blue snake, she mis-swallows the chunk of snake meat she was chewing, which settles in her chest and bothers her forever after, becoming an internal demon she calls "the kreen".

This is the sort of book written for literature students to analyse. Even I, who didn't enjoy English Lit in school, can spot the snake motif, the way the phrase "snake bite" is used by Meena and by Mariam (one refers to a wound on her chest, the other to a bite of snake meat stuck in her chest), the many snakes in the story (the blue snake, the sea snake, the wave generator, the road, etc. etc. etc.), and the ouroboros-inspired structure of the story and think "that's clever!"

But clever literary gimmicks don't necessarily make for a joyful reading experience. And "clever" is a smug kind of thing, anyway, it's not the same as "intelligent" or "wise"...

The book reminded me of other ones I've read. It is as seedy as a Glen Duncan novel, but without wit or humour. It has a setting & future that could be from an Ian McDonald novel, but without the breathless energy. It's as literary / clever / pretentious as a Salman Rushdie novel, but without the musical prose. I've seen Haruki Murakami mentioned as a comparative writer: this could well be true as I never got more than a few pages into the one Murakami novel I tried, because it was too seedy too quickly. The Girl in the Road takes a bit of time before it gets really sordid.

What baffles me is that many of the authors and other works this novel reminded me of are ones I enjoyed - some years ago. Perhaps my taste has changed. Perhaps this book is a brilliant achievement and I am just no longer receptive to the sort of thing it is trying to do. Or maybe, just maybe, the book is not just clever, but also a little bit stupid. There were many weird things in the book, but aside from a very disturbing sexual encounter involving a prepubescent child and a slightly disturbing scene where a horny woman contemplates raping a gay man, here's a quote of one that seemed a bit silly to me:

"I start thinking of the first woman I ever slept with, Ajantha. She was eighteen. I was fourteen. She was my peer counselor at D.K. Soman International. It was a scene from a lesbian pulp comic. One night at school we were sitting across from each other cross-legged and she leaned over as if to whisper something in my ear but instead she sucked on my earlobe. I remember my vagina made an actual noise, an un-glocking, because my labia got so swollen they unsealed. Ajantha heard it too and pressed her palm over my pants and things went from there."

OK, so the author is in possession  of a vagina and I am not, so I guess I should not doubt her description of noises vaginas make... but really? Are vaginal un-glocking noises a thing? WTF did I just read? It does feel at times like a novel that is so convinced of its own genius that it oversteps into the realm of nonsense.

Lots of ideas went into this book, but the whole lacks joy, pleasure, and vim. Most plot twists are obvious long before they happen. None of the characters are likeable. Both first person narrators are mad. Sexuality is casual (nothing wrong with that) and icky and messed up in ways that match the worst predictions of previous generations' shame-obsessed "socially conservative" religious zealots. The book predicts a future where gender equality doesn't make people safer, but rather, a future where women commit all the same horrors that male abusers do: child molestation, rape, jealousy murder...

The Girl in the Road left me feeling hollow, as if my soul had been soiled a little by the reading of it, the way binging on too much Breaking Bad or Game of Thrones will do. Ultimately, I found the novel joyless and icky. I would not recommend it to anyone who doesn't have a strong stomach for explicit sex and child molestation.