Review: The Prince of Cats by D. E. Olesen 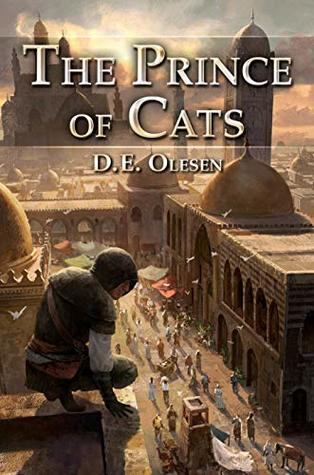 The Prince of Cats is an adventure novel about a thief in a fictitious medieval Arabian city. We meet Jawad, our hero, in a dungeon, awaiting his fate. Instead of the executioner, a private guard comes to visit him, to interrogate him about the Prince of Cats - an infamous thief. Jawad offers up just enough information to be useful, so he is taken from the dungeon and put in the service of a rich trader. His task: to catch the Prince of Cats, and to protect the wealth of the merchant.

The novel does the handwaving, vaguely Arabic thing that some stories do - infatuated with the aesthetic, but not willing to locate the novel in one place or time. Its setting is basically the world of the tales of "Arabian Nights", only there is no magic, there are no djinn, and there is no Islam. It's not really a fantasy setting, nor history.

So we get street rats, slaves, guards, gangs of thieves, rich merchants trading silk and dyes, jewels and silver and gold. We get Arabic names and words (medina, haramlik, etc - I assume it's Arabic rather than Ottoman, but cannot be sure as I don't know any of the languages of the Middle East). And we get the threat of thieves' hands being chopped off, a lot of socialising over tea, and advances in astronomy and mathematics. On the other hand, we also get a gay character, and women characters who have a relatively high degree of autonomy and independence.

Between the setting and the adventure filled plot, the novel makes for an easy read. Jawad keeps his plans and schemes to himself, so the reader might see what he does, and get glimpses of his thoughts, but anything that relates to why he does the things he does, or what he plans to do, is withheld until it happens / comes to fruition. Even so, some plot twists are not hugely surprising.

What was a bit surprising is just how much Jawad gets put through the wringer in the book. Clearly, the author is of the Jim Butcher school of thinking, throwing his protagonist into ever deeper piles of shit, peril and torture. Unfortunately, I did not find that this made me feel more worried about the character, or more invested in him. He tries to play it cool, so as a reader, I shrug off his pains quite easily.

By far the biggest problem the book has is that Jawad has virtually no friends. He has some connection with two old men who both seem to suffer from the early stages of Alzheimer's, but they aren't his peers / mates, but acquaintances he feels fond of. He also slowly grows slightly attached to two people in the merchant's household, but keeps them at arm's length and ultimately proves himself unworthy of their trust.

The Thief of Cats is entertaining, but not brilliant, not breathlessly paced, not so engrossing that you can't put it down. Its characters are okay, but not charismatic or mysterious or memorable enough to feel very strongly about them. It's basically the sort of novel that you might get if you took The Lies of Locke Lamora, set it in an Arabian setting, and toned down all the  excitement by a notch, and took out any Locke-Jean bromance (and any other close friendship).

Fans of Harry Dresden novels are likely to find this book right up their street - it's on a par with that series.