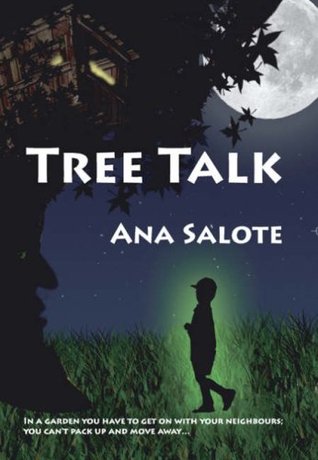 Tree Talk is a science fiction fantasy novel told from the perspective of an ash tree in a wild(ish) back garden. Ash lives her life in a way that does not have consciousness, but which involves a sort of communing with other plants, and a calm, plant-like way of being aware of the world outside her reach. Then one day Charlie, a little boy, touches Ash, magically awakening a mind. In the book, they call it gnosis, and Ash soon finds out that she is not the only non-human who has it.

Any story told from the perspective of a tree (as a first person narrator, no less) is very likely to hit upon matters environmental sooner or later. Fortunately, Tree Talk allows itself to take it slowly: much of the first part of the book is Ash forming a mind and a connection with Charlie and his family, observing the wider world through his experiences (while Charlie perceives the garden through Ash's plant sentience).

As with Ana Salote's other novels (Oy Yew), there is a tenderness at the heart of Tree Talk. Ash's experience of the world is initially one of affectionate, caring naïveté. Charlie, too, starts out this way. However, this is not a kind world, and we get a sense that things are going badly wrong. Ash learns to watch TV, which brings her more and more bad news, while Charlie soon gets a sense that one of his neighbours is not a nice man, with evil designs upon the garden...

Even so, this is a joyful book. Ash using her now-conscious mind to watch TV (and teaching other plants consciousness, who also then become rather fond of watching TV) is very endearing, especially because of her particular interests...


"My favourite programmes were the soaps, because they put together two things which fascinated me: stories and human behaviour. Brooke Farm is the best soap because it has the most weather in it."

(Her penchant for soap operas also leads her to think of events around her in soap operatic terms. Later she worries a lot that Charlie might risk a coma when he starts having sneaky adventures, because in soaps, comas are frequent consequences to dramatic events...)

While the novel is very much Ash and Charlie's story, there are other important characters. Wilfred the rat is wonderfully cynical about humans, and fierce. Emma, Charlie's mom, is all too credible as an overstretched woman struggling to raise a child while the world economy goes down the drain. This is a novel where we glimpse very adult problems through the partial perceptions of a tree and a young boy, and it works very well at building suspense (the reader fears what decisions Emma will take when someone offers her much-needed money for the garden).

All that said, the novel cheats when it comes to delivering an outcome of its more global problems and questions. It's largely a science fiction novel set in the near future, but the problems of the world, it seems, have no chance of being addressed without a fantasy solution. To resolve a science problem with a fantasy solution is cheating, and I grumbled a lot when I saw where the book was going.

There's lots of interesting stuff going on early in the book, including some utopian thinking about communities, and the book is brimming with thoughts about humanity and the world, so I had hoped for a much more complex treatment of its themes in the second half. Instead, Tree Talk feels more like children's literature by the end, much more so than it does in the beginning. That said, it's still a much more intelligent nature-themed book than, say, the movie Avatar...

It's still a beautifully written, gently amusing, kind novel, with a rare and interesting perspective.  I very much enjoyed reading it, even if I grumbled at some parts near the end.