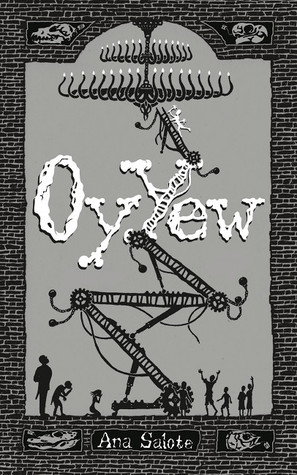 Oy Yew is a children's novel set in another world. It's not a world of magic or dragons or aliens, but a world much like ours around the time of Charles Dickens' stories.

Oy is a tiny boy who grows up sustaining himself on crumbs and the smells of food. He's mostly unnoticed until one day someone does spot him. Then, he is quickly caught and forced into servitude, first in a factory, then in a country mansion. His comrades in slavery are other waifs, children from Poria who arrived on the shores of Affland as boat people on tiny rafts, sent across the sea by desperate parents during a famine.

Oy is the smallest waif, the quietest waif, the one who listens and offers nothing but kindness and intuition to those around him. His presence gradually improves the lives of the other waifs, but it also brings with it an intuition that something is wrong. How come there have been more accidents than usual lately, always befalling the waifs about to be freed? What secrets lurk in the sinister Bone Room? And why is Master Jep, a bone collector, suddenly so interested in Oy's thumbs?

Oy Yew is a fantastically atmospheric novel. It reminded me of Otfried Preussler's Krabat, and of Michael Ende's Momo. (Oy is quite similar to Momo in many ways). Or, in more British terms, of Alan Garner's scary children's novels - except that the atmosphere in Oy Yew is richer, the story more lovingly told. There is a tenderness in Oy Yew where Alan Garner goes for grand drama, and that tenderness makes it a more beautiful story. Basically, it's a superior novel to The Owl Service and The Weirdstone of Brisingamen.

It's not flawless: at times, the text moves too fast, in a disorienting way. Some of that disorientation happens early on, which could discourage some readers. I don't know whether the author was trying to create an atmosphere of hectic movement, or whether she saw the story in her mind and left out some words that might have helped me as a reader to follow it. All I know is that there were quite a few times when I was a little bewildered over who was there, who was who, and what was going on. I imagine child readers are likely to get confused, too. Those moments of bewilderment are literally the only flaw, and it's very much worth persevering if the text befuddles you momentarily.

The prose is beautiful, the story is filled with atmosphere, creepiness, tension, kindness and joy. The waifs are lovely and the characters around them include quite a few memorable personalities. Even as an adult reader, I was on the edge of my seat at many points, and I felt the peril in the story was real.

To my mind, this is one of the finest children's novels ever written. It's so good that I consider myself an instant fan of the author and immediately ordered the sequel.