Review: The Seven Deaths of Evelyn Hardcastle by Stuart Turton 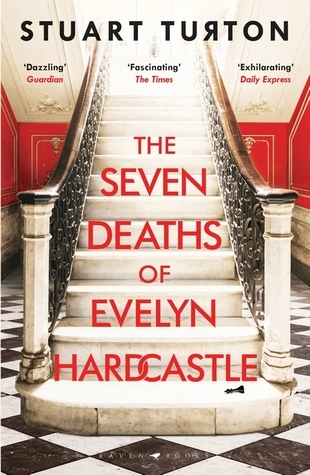 The Seven Deaths of Evelyn Hardcastle is a high concept crime novel. Its one-sentence pitch is "Groundhog Day crossed with Agatha Christie".

Our hero wakes up without memories, with a single word on his lips: "Anna". He's in a forest and witnesses a young woman being chased by a villain. He hears screams and a gunshot. And then someone pursues him, gives him a compass, whispers a word in his ear, and allows him to flee to the nearby country mansion Blackheath.

In Blackheath, he finds people who know him, but his memories stay out of reach. All he recalls is the violence he witnessed that morning. The day progresses with an unsettling feeling that there are dark secrets lurking in the house and the people who are gathered here. However, he manages to make one single friend, Evelyn Hardcastle, who sees possibility and potential in his blank state. A promise of renewal, a new start, a chance to become a better man (for there are unpleasant rumours about his profession...)

The next morning, our hero awakes again, but in a different body, reliving the same day, looking at it through different eyes. It is the day of Evelyn Hardcastle's murder, and our hero's task is to solve it.

Seven Deaths is a novel that manages to build up intrigue and tension relatively gradually. If it weren't for the title, a reader might find the first chapters a bit slow, confusing and frustrating. (We don't even find out that Evelyn Hardcastle dies until he has gone through the day several times!) Fortunately, the title tells us the grand drama that the narrator does not know, and therefore adds tension even in moments when the narrator is bumbling along gormlessly.

Each body he inhabits is different, and each body comes with different emotional patterns, instincts, and physical limitations. After the first day, our narrator is in a constant battle between his own mind and the habits of the person he occupies. Short-tempered people, calculating people, flighty people, sometimes his hands do things before his conscious mind notices them. It's a very interesting idea, and I think in the hands of a virtuoso, it could have been gobsmackingly brilliant to read. Stuart Turton is a good writer, but not a prodigy, so he tackles this deftly but not very immersively  or subtly by having our narrator tell us about his struggles. The same goes for the rest of the book: it is written well, but the genius is in the concept, not so much in the execution. Characters may have secrets, but they don't tend to have much complexity. The basic crime story has peril, but is thin on authenticity. The end result is a book that is immensely readable and good fun, but which feels like you can glimpse a hint of a magnificent could-have-been through the text that is. A good novel that feels like it might have been great.

Definitely worth a read.

I've been meaning to try this one for a while -- looks like that's a "go ahead and grab it", then!