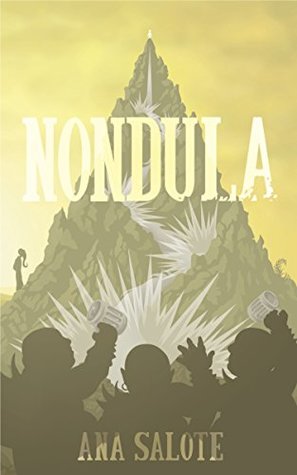 Nondula is a children's fantasy novel and the sequel to the amazing Oy Yew. So, before you read this review, check out my review of Oy Yew - it's such an awesome children's book.

Now, Nondula. After their narrow escape at the end of Oy Yew, a handful of waifs are blown into a different land by a tornado. Specifically, Oy, Alas, Gertie, Gritty and Linnet. The land they arrive in is Nondula, and it is something akin to a utopia, only its neighbour is a dystopia, so there's trouble brewing ahead.

Nondula is a land of vegetarian peaceful academics, who live peacefully, discover their inner jenie (spirit) and are driven mainly by self-realisation. Their neighbours, Fellund, are carnivorous thugs, short-sighted, short-tempered, abusive, violent and greedy. They abduct Nondulans (and people from other lands), enslave people, and are entirely villainous. Soon, Oy and his fellow waifs are caught up in the conflict.

Nondula is a very different book to Oy Yew. There is still a gentleness around the way the waifs are written, but other than that, everything has changed. Even the characters have changed: Alas is now standoffish and paranoid, in a way that felt like it was exaggerated compared to his characterisation in Oy Yew. That change in particular made me wonder whether the book was written after a long break rather than immediately after its predecessor.

There are also changes in the pacing, plot, and atmosphere. Oy Yew was a masterpiece, even if it was sometimes bewildering and disorienting. It built an atmosphere of peril and threat, but did so by using dread more than anything else. Nondula tries to be less bewildering. We spend the first third of the book in a utopia where everyone has a bit of a rest after the grand adventures of the first book. The slow and gradual start is then followed by adventures in Fellund, but those adventures feature more violence and physical abuse than the first book, and less ominous dread. Torture, executions, animal abuse, children being hunted with dogs (and, it is implied, being torn apart by them)... if Oy Yew was a novel comparable to Krabat, Momo, The Owl Service, then Nondula is more like Gulliver's Travels or the Wizard of Oz, a travelogue through weird lands, but distinctly more violent.

There is still a richness and a gentleness around the way the book sees the waifs. Poor Linnet's illness is heartbreaking throughout the story. But the kid gloves have come off  - Oy gets thrown around, injured, tortured. Slaves and dogs and animals are whipped, tortured, abused, killed en masse. The first book was about something fragile and kind trying to survive in an ominous and cruel world. This book is about fragile and kind things being abused and kicked around and damn near pulverised. For me, dread and threat are more effective in a story than brute force, so Nondula didn't bewitch me the way that Oy Yew did.

Much as I loved Oy Yew, I must admit that I struggled through Nondula. With unsteady pacing and a totally different atmosphere, it didn't feel like a continuation. I still wholeheartedly recommend the book Oy Yew: it works fine as a standalone and needn't be a trilogy. Nondula... well, I don't know if my expectations were too high after the first book, or whether having a case of man-flu was affecting my enjoyment, but I wasn't engaged by it in the same way. That said, other reviewers rate Nondula as highly as Oy Yew, so I may well be the odd one out on this one.