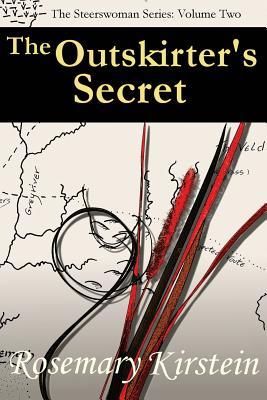 The Outskirter's Secret is the second novel in the Steerswoman series. Rowan, the Steerswoman and Bel, her Outskirter / Barbarian companion, continue their quest where the first novel has left off. They are still trying to find out more about the mysterious blue gem & metal fragments that they nearly got killed over in the first book. Now, they are headed into the Outskirts, where life is much harder, civilisation a distant theory, and where the wreckage of a fallen star should be, if Rowan's reckoning is right...

The Outskirter's Secret is still a novel of adventure and questing, a novel about friendship, and a novel about two women taking on the world together while encountering different people and different cultures. However, it is not so much a novel of pursuit and intrigue: Rowan and Bel now know that a chief wizard exists, they know his name, and they know he is their enemy, but there are no more minions in pursuit, and aside from the natural environment, raiders, and vendettas, no one is trying to kill them. Well, no one apart from goblins and demons and lichen camouflaged as rocks and all the other perils of the lands they travel through. So, no chase, but much peril: it's an immensely readable adventure, always interesting and never boring.

The book does recap things from the first novel, but to be honest, I would not want to read it on its own. This is a series where reading the books in order is worth it: both books I've read so far were excellent, and the second builds on the events of the first. It delivers a satisfyingly dramatic climax, and even though the quest is not at an end, we learn more and get a stronger sense of what the wizards' secret might be.

Fantasy literature at its very best - and still ahead of its time (first published in 1992, it feels like it was written in the 2010s...).