Adventures in Time and Space with Max Merriwell by Pat Murphy 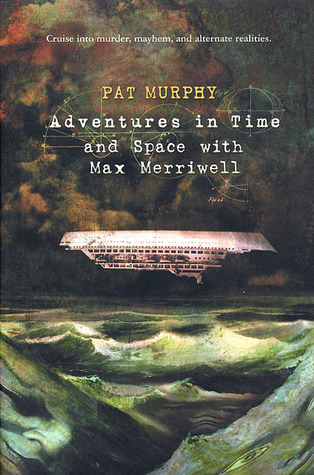 Adventures in Time and Space with Max Merriwell is a bit of an odd book. The story takes place on a cruise ship, where Susan, a recently divorced librarian, and her friend Pat, a physics research student, are travelling from America to Europe on a repositioning cruise. They meet Max Merriwell, a science fiction author who also writes fantasy as Mary Maxwell and gritty crime novels as Weldon Merrimax. But all is not as it seems, and as the ship heads for the Bermuda Triangle, people who should not be aboard - who should not even exist - appear to be involved in some dramatic events...

I did not know it when reading it, but this is actually the final volume of a larger project. I have not read the precursor books, so I can only read it as an independent work. As such, I must admit I had higher hopes for the novel. The title sounds promisingly adventurous, but the story does not quite live up to that.

If I hadn't read the superb The Falling Woman, which was written much earlier, I probably would have thought this one to be a writer's first novel. It's a novel about writers, and imagination, and about creative writing and workshops. The protagonists are young(ish), and they have that hard-to-define quality of characters in young writers' novels: they may have jobs and some back story, but they don't quite come across as the people who match their own back stories. Their personalities match their jobs a little too well, to a point where they feel a bit like the 'default' people for their particular jobs. They don't surprise the reader very much - in fact, 'default' is a word that fits this novel a bit too much.

As the novel (and the ship) progresses, events become more and more chaotic, until it becomes clear that the book is essentially a literary thought experiment that turns quantum physics into a macro-scale event - like Schroedinger's Cat, only more so. In fact, towards the end it feels a little like a popular science physics text which has been turned into narrative.

The end result is a novel that doesn't really fizz and sparkle, and which isn't as absorbing as a good novel should be. It's all very clever, very quantum, very meta, but none of those things make a good story on their own, and the characters inside this novel just are too 'default' to make the story shine.