So, is there a trend for "senior citizen young adult" literature out there? If not, then I suspect Paul Magrs may sneakily have been carving out a genre for himself while everyone else wasn't paying attention.

I enjoyed the first two Brenda and Effie mysteries without ever thinking about its genre. Cheerful, light-hearted gothic fun, with fairly pacey plots, a mischievous disposition, and older protagonists. But that alone would not make a new genre: the 100-year-old-man-who-climbed-out-of-a-window-and-disappeared, for example, is hardly a book aimed at an older audience. 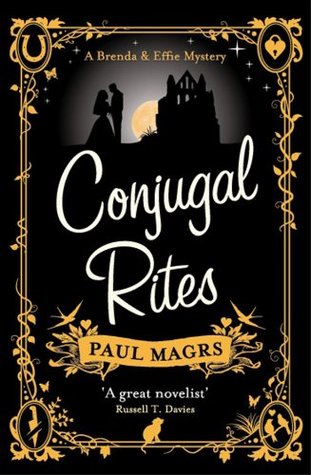 It's not until I read Conjugal Rites that I started to suspect that something a bit unusual was going on.

Brenda and Effie are both older ladies. Brenda, we find out in the first novel, was created by Doktor Frankenstein, intended to be the bride for his first creature. However, she has fled from that fate, and, after hundreds of years of trying to find a way to fit in, she has set up a B&B in Whitby. Effie, her neighbour, is a spinster and a descendant from a long line of witches. She's a bit fierce, a bit gullible, but very close to Brenda. Together, they have gothic adventures, whether being seduced by Dracula or trying to uncover the sinister secrets of a con man who makes women younger. The two big old hotels in town each have their back histories and charismatic owners (the sinister and evil Mrs Claus, running a Christmas-themed hotel with cannibalism and enslaved elves, while the other hotel is run by the widow of an elderly London-based Chinese Criminal Mastermind and Supervillain). It's all gloriously playful with gothic tropes, and good fun.

In Conjugal Rites, some of Brenda and Effie's former adversaries are again up to no good. One is running a night time talk radio show that somehow compels everyone to spill personal secrets and tell the juiciest, most indiscrete gossip about each other, while another has arranged for a suspicious congress for retired superheroes. Worst of all, it looks like Brenda's oldest adversary has been summoned to town...

While reading the book, some things jarred a bit: frequent repetition, and a habit of summing up everything that has happened so far every other chapter or so. It's almost like one of those TV shows, where, right after the ad break, characters quickly discuss something that happened previously, so that the audience remembers the context for the next scene. At first, I thought this was slightly clumsy writing and I recalled that similar things had bothered me a little in previous volumes. Then a penny dropped: what if it was not clumsy? What if, in fact, this was a planned out strategy? The regularity of these little plot-summary-moments was just too carefully timed. Suddenly, the somewhat strange look and feel of the covers of these books started to make sense. The larger format, too. I read this one on Kindle, but I'd now bet that these books were all printed in slightly-larger-than-standard print, with a bit more spacing between the rows. I'd been reading books written, designed, printed, and created for an elderly audience with weaker eyes and a need for memories to be frequently refreshed. I'd read several volumes without ever suspecting that I was not the target audience.

Maybe there are many books like this series out there. Maybe this isn't new to anyone else. Perhaps I was the only one thinking that older people were mostly targeted by Mills & Boon and Danielle Steel and all those lavender-y, awful-looking romance books, rather than anything fun and adventurous. In that case, shame on me. I used to enjoy watching Murder She Wrote and Columbo and other crime movies meant for older viewers; I should hardly be surprised that there are gothic adventures written explicitly for them, too. (I think someone should make te Brenda and Effie books into a TV series: clearly, with the ageing population, they should have a ready-made market ready)

Once I got past that realisation, the book continued to be pleasingly diverting. There are some aspects where I wanted things to go down a different route: hell features in this novel, but it is not a hell that convinced me. Worse, the entire plot arc about Brenda's erstwhile suitor was uncomfortable and troubling to read. (For a Brenda and Effie novel, there really isn't enough Brenda in this one...)

So, not quite up there with the first volume in terms of its fun, but still a pleasing novel - and the only young-adult-for-senior-citizens series of gothic adventure novels that I'm aware of. Hats off to Paul Magrs for eemingly creating an entire market niche, which he totally owns!