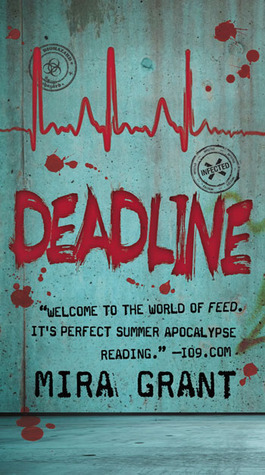 Picking up a few months after the events of Feed, Deadline tells the story of our intrepid bloggers' investigation into what might be a huge conspiracy.

If you haven't read Feed, do not read this review - I'm afraid there are some massive spoilers ahead.

Shaun Mason has not gotten over the events in Feed. His sister George, who died, lives on in his head. He can hear her talk to him and he responds aloud. He isn't scared of the fact that he has gone insane - he is much more scared that he might become sane again and lose his sister a second time.

Despite Shaun's mental state, the After the End Times, the news empire they created together, continues to flourish in the hands of his team. Then, one day, a researcher stumbles into their office. A researcher who, it is reported, has just died. She brings with her a tale of conspiracy and cover ups, of possible murders at the CDC, and a terrible secret about the nature of the zombie infections and the reservoir conditions. Seeing a chance to uncover the grand conspiracy that killed his sister, Shaun gets his team together and pursues the story - barely escaping from one assassination attempt to another.

Deadline is not quite as compulsive reading as Feed. Feed was about young people trying to create their place in a post-zombie world and conquer the media. In Deadline, that conquest has succeeded (albeit at a terrible price), and we follow a slightly more dysfunctional gang as they try to figure out how to pursue a story on their own. In Feed, they followed a presidential campaign, tagging along one particular senator - take that drive away and hand the reigns to a schizophrenic Shaun Mason, and there's a bit less direction.

It's still very readable and good zombie fun with real thrills, but the book has a bit less sparkle than the first one, and it reads much more like a "middle novel". The first had an ending. This one does not have a real ending, but sets up a final novel in a trilogy. It's not a standalone novel, and you notice.

A good read nonetheless, and I'm looking forward to the third volume.